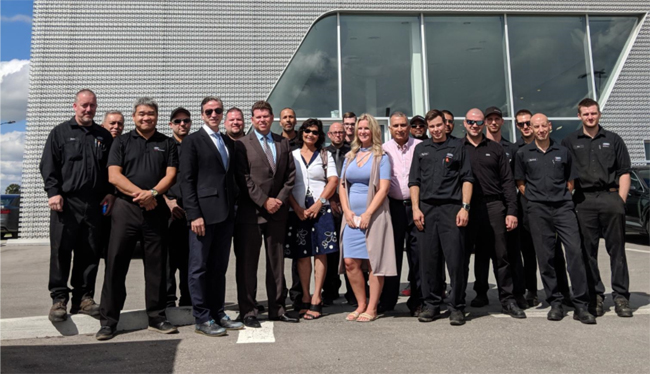 This is the first time Bramgate Automotive has been in the race for the Canadian AutoWorld Employer of Choice Award and Bramgate’s first visit to the winner’s circle. First time lucky? Nope! The win is the result of a carefully crafted approach to dealing with employees and customers. Bramgate calls it the Vision.

Bill Johnston Jr., Bramgate co-owner, explained that Bramgate has a culture, which employees are encouraged to embrace when dealing with customers.

“Our Vision is to make every customer experience Easy, Efficient and Enjoyable,” he said.

That can be as simple as asking staff to greet each customer with a smile and encouraging employees to think of new ways to deliver quality service as for example through system upgrades that let each Bramgate service advisor use their computer to text each customer.

The Vision is not all business. On the social side, Bram- gate stages events such as the pumpkin carving contest and a children’s holiday party for staff.

“All of these actions, large and small point the way for our staff to understand and embrace our culture,” John- ston Jr. said.

Johnston said representing only two brands – VW and Audi – does reap some benefits when it comes to bring- ing about the Vision because there are only two brands with only two brand cultures that must be made relevant to the public. But he continued the Bramgate Vision, ‘transcends’ the brands.

By striving for an easy, efficient and enjoyable experi- ence for both our external customers and our employees (internal customers), we get a much higher buy-in from our staff.

In 1959, Bramgate Automotive founder Bill Johnston joined VW Canada in the automaker’s Ontario retails sales office after six years at Ford Canada’s Ontario district sales office. But Johnston’s goal was to run his own dealership. He realized that dream in 1967 when he opened Bramgate VW in Brampton.

In 1972, VW awarded him the Audi franchise for Brampton, Mississauga and Caledon Ontario. Audis were sold from the VW store until 2005 when the Johnstons opened Audi Mississauga.

Brad Johnston explained that the preowned store and collision centre staff are made to feel part of Bramgate. He cited a regular newsletter and activities that are shared by all. There is a social committee at each location that runs “spirit-raising events.”

There is constant communication between all divisions. And most importantly, the two divisions are not so specialized that only a few know how to manage them.

“We have managers and staff that have moved between the locations,” Johnston added.

He explained that Bramgate is fortunate to have managers and staffers who understand that the Bramgate culture is made up of small, every- day actions like having a ready smile, while staffers know they will be listened to when they suggest improvements.

“There is a constant feedback loop between employees, management and ownership. When the employees know that their recommendations for improvements are being

heard, they bring a strong sense of empowerment in their daily tasks,” Johnston said.

That fosters high morale and makes it easier to deal with customers.

Staff at Bramgate is a good mix of long-term, medium- term and newcomers, Bill Johnston Jr. added. He’s realistic. A small company can’t always offer everyone the opportunities they seek. And competition for well- trained staff- especially technicians – is fierce.

Still, they try. Johnston Jr. said the focus on listening to staff and empowering them to make decisions ensures that they will feel valued and stay.

“We do invest a lot of time and effort to bring in the right staff members, but we know that when we experi- ence turnover, we approach the situation with the hope that they may return as a future customer or possibly a future employee,” Bill Johnston Jr. continued.

When someone moves on, the goal is to fill internally since they are choosing from staffers who embrace the Bramgate Vision. Teaching the Vision to a newcomer takes time and there’s no guarantee they will embrace it.

The Johnston brothers recognize that the competition also runs training programs and is also involved in the community. But both insist that the family-run model is a strong one.

“We are actively involved in the day-to-day operations of the dealerships.” That, they insist “provides a strong motivation to our employees and management to foster family values in their work lives.”

Founder Bill Johnston Sr. is still a presence. On the Bramgate website and in the TV screens of the various departments, he can be seen meeting with staff.

This has been a memorable year for Bramgate. It won the 2019 Canadian AutoWorld Employer of Choice Award and its founder, Bill Johnston Sr.’s leadership and vision has been recognized by the Brampton Board of Trade, which named him Businessperson of the Year for 2020. 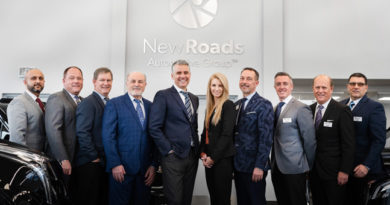 April 21, 2020 Tom Venetis Comments Off on Caring about its associates is the key to NewRoads’ second Canadian AutoWorld Employer of Choice win 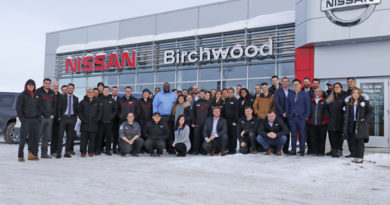 May 8, 2019 Tom Venetis Comments Off on Birchwood Automotive Group Thrives On Employee Engagement