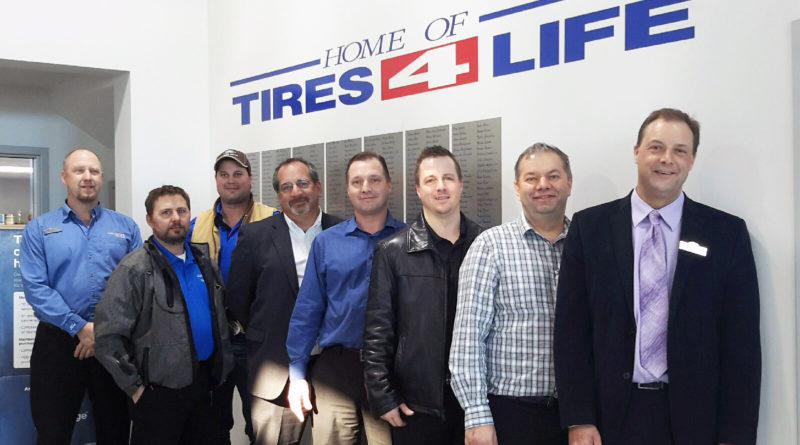 LACOMBE, ALTA. – If you ask Darren Gagnon for his best tip to ensuring a smooth-running ship is manned by a happy staff he will keep coming back to the same word: Respect.

He’ll touch upon things like open-door policies, training and developing culture, but for the CEO of Lacombe Ford in tiny Lacombe, Alta., the best route to happy staff is to respect them and trust they will do the same.

“Our mission statement talks about provided the best experience in the industry for every customer every time with no exceptions,” Gagnon explains. “We empower our staff to make things happen and that all starts with respecting them.”

Lacombe Ford has been selling cars since 1989. Located roughly 30 minutes north of Red Deer, current ownership has been in place since 2004. Gagnon is majority holder of the LAND Automotive Group, which counts Lacombe, Drayton Valley Ford, Accessoryland and C.A.R. among its holdings. 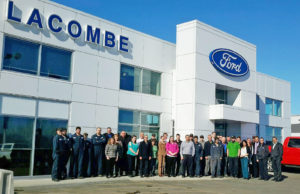 Gagnon says Lacombe Ford has won the automaker’s President’s Award eight times in a row with eyes on a ninth this year.

The award focuses on customer satisfaction as a main measure of excellence and rewards dealerships within the top 10 per cent of their region. From that pool of winners, Ford then bestows its Diamond Award to the cream of the crop. Lacombe Ford has received Diamond Club recognition two of the last four years.

And while the accolades are nice, he says they really underscore all the work spent building a culture at the store with the staff about focusing on making customers happy.

Key to getting buy, he notes, is communication.

“I gauge the staff on many different levels and offer a voice on how to take care of our customers, how to treat each other and how to communicate with management.”

Once system put in place roughly two years ago that has yielded the best results is Team XL.

Composed of a revolving group of roughly 12 staff members combining new and senior staff who represent every department, Team XL has monthly sit-downs with Gagnon where everything and anything is on the table.

“They get to sit with me face-to-face once a month. I buy them lunch and we sit down and have a communication circuit where I get to tell them what I am thinking and they have the responsibility of sharing that with the rest of the teammates,” he says.

“They can bring any of their concerns or ideas straight to me instead of going through the normal channels of managers and department heads, they get my ear and I get theirs at least once a month.”

Results have been “fantastic” and wide-ranging.

Team XL developed an employee-of-the-month program decided on by staff. It has also instituted a multitude of customer-facing efforts.

Gagnon says they have changed the way the store greets and thanks customers, ensures shuttle vehicles have water and snacks for customers and also return every detailed car with a thank-you note, an extra air freshener and a bottle of water.

“The people who are dealing with customers on the front line have a better understanding of how to take care of them than me sitting upstairs in my office,” he says.

In addition to the “little things” driving satisfaction, Gagnon and his team are quick to point out its CSI pièce de résistance, Tires4Life.

The program is a loyalty rewards system with free enrollment. Customers that buy a new and/or used car from Lacombe Ford and complete all scheduled maintenance at the dealership will get free tires when it comes time to replace them.

Gagnon and his team launched it seven years ago and gave away its 1,000th set of free tires last year.

While those upfront costs may give some readers pause, he insists the ROI is great.

“We match it up with prepaid maintenance programs on Ford vehicles and that helps, but it really does push a lot of business to our service department. We have a Quick Lane in a separate building on site [one of the only ones in Canada] and it allows us to give our customers that need maintenance more priority service than having to go into the service department.”

The team is also changing the staff and the store’s community involvement levels.

Instead of giving $500 to the local curling club for a bonspiel, he sais, they are giving $250 and entering a team.

“We’re also recognizing staff for their charity work or involvement in things like Cub Scouts or coaching hockey.

“I keep coming back to the word respect. You have to have respect for your staff and integrity in dealing with them. When I say something, I am going to do it.”

It’s a tough time in Alberta now, and he says recent actions by his parts department show just how invested the team is in the collective.

He said the team came to management with a plan on how a few cuts to part-time staff and additional effort by more senior staff would ensure the department does better.

“You don’t have that kind of thing happen often.” 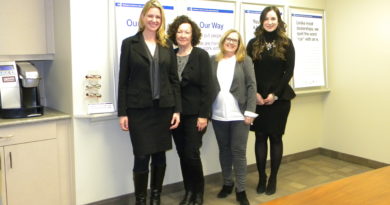