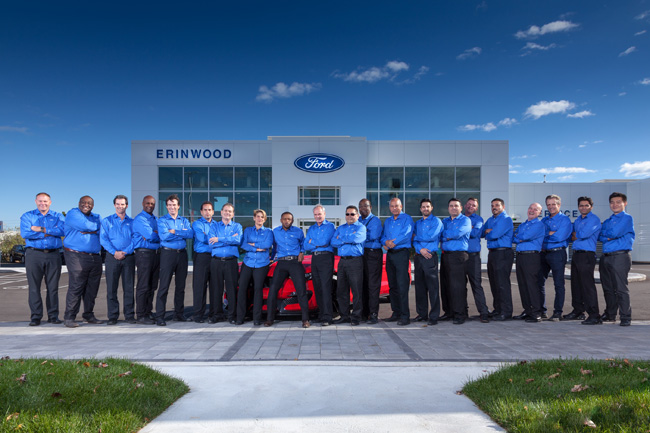 The trophy cabinet at Erinwood Ford must be chock full: Erindale has won the Dealer Rater Canadian Dealer of the Year Award for 2017 and 2019; it’s a seven-time Ford Diamond Award winner; the dealership won the Ford of Canada Salute to Dealer Award for Community Service 2019, and now the 2019 Canadian AutoWorld Employer of Choice Award.

You don’t win awards unless you have a well-motivated and happy staff. Erinwood Ford dealer, Dave Raymond agrees. His recipe: hire the right people.

Raymond explained what he means by the right people.

“We look for people who are well-rounded people – people who are engaged, have teamwork skills, people skills; time management skills, etc.– as opposed to just hiring the sales guy from another dealership,” said Raymond. “We just don’t base it on sales ability alone.”

He get calls and emails from headhunters looking to place folks with auto retail experience. He ignores them. He prides himself on the ability to hire people through staff and dealership networks. His staffers include someone who managed a sporting goods store, another who owned a manufacturing company. Most had never sold cars before.

And they hired a BDC representative, who happened to have her Social Media Certification. She not only contributed to her BDC position, but now is the Erinwood Ford’s social media manager.

Teamwork and no performance reviews

On a snowy day, you can expect to see a manager wielding a shovel or scraping the mud off the driveway at Erinwood Ford. They don’t sit in their offices and get someone else to do the job.

“There aren’t a lot of egos here,” he said. And no structured performance reviews either.

Managers review their team members’ performance on a daily basis. His managers walk the store daily talking to everyone; Raymond often joins them. The communication goes both ways. If a sales person has a problem with, say, a customer, they’re not afraid to turn to the sales manager or talk to Raymond and get help. And there is a weekly and monthly sales meeting luncheon when they review sales stats and Ford and Dealer Rater CSIs.

Raymond also prides himself on listening to staff. He insists there had to be buy-in from staff before Erinwood Ford got a new CRM system. He also consulted staff when the store’s website got a remodelling. Raymond also brings in a coach to help staff handle the stresses and strains of the business.

Once a year, staff gets to review the dealership’s performance in a survey administered by Ford Canada. The dealer said he and his management staff take the results seriously.

Raymond bought Erinwood Ford in 2011. He’s a dealer kid who worked his way up from parking cars to the body shop and GM at Evans Ford, his father Matt Raymond’s store. Erinwood Ford is located in Mississauga, Ontario and is the only store Raymond owns. There are 110 staffers. The average length of tenure is just over 10 years.

But, if you think that Raymond runs his one store by instinct and experience alone, you’d be wrong. “We chart everything. We are probably one of the most computerized dealerships on the planet,” he said proudly. “We were the first dealership in Canada to have a website with pictures and prices of all the cars on it. Everybody copies our website.”

Raymond continued that each and every tool in the DMS and CRM system is in use. That’s why Ford and CDK turned to Erinwood Ford when they needed a dealership to beta test their new service edge software package.

All this hard works creates a positive atmosphere at Erinwood Ford, one that is palpable. “When you walk in, you feel it’s different. The Ford guys like coming here,” Raymond said with pride.

He added the automaker uses Erinwood Ford as an example of how dealerships should do business. “The staff know this and it makes them enjoy their work place even more. It makes them feel good.”

As part of Erinwood’ Ford’s community work, the store took on a young man with a disability to work once a week at the dealership. When he started shining cars, he wouldn’t speak to anyone.

“Now, he chats up a storm,” Raymond said. “And he’s come a long way from wiping off cars. Now, he sorts invoices and deals with staff. They are great with him.”

Raymond and his staff take pride in their community work. They are particularly proud of their work for the Erindale Secondary School’s Character Counts Award.

Character Counts is a character-building program which aims to teach Erindale students the qualities necessary to be successful once they graduate. The dealership has partnered with the school to supply one new Fiesta to a senior graduating student who excels at leadership, academics, mentoring; and community involvement.

“We give a brand-new vehicle to the winning student and scholarships to the two runner-up students,” he said. 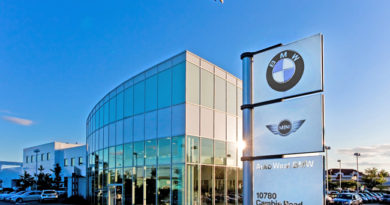 May 8, 2019 Tom Venetis Comments Off on The lure of luxury and being part of a family a winning combo for Auto West Group 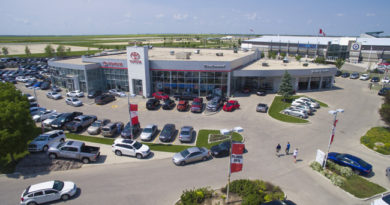 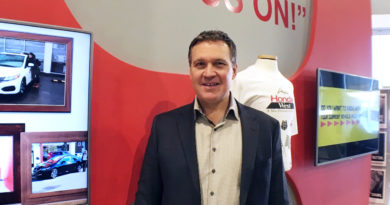 No commission system part of a ‘culture of innovation’

May 16, 2016 Jackson Hayes Comments Off on No commission system part of a ‘culture of innovation’