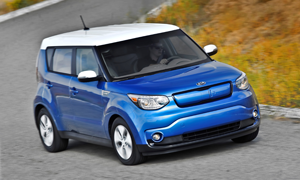 Kia’s first venture into the electric vehicle market in Canada is a modest retail strategy that will see 11 of its dealers sell the new Kia Soul EV.

There won’t be much of a hard sell to start, though, as the majority of the 50 units earmarked for Canada this year were presold prior to the launch date.

“Based on the initial interest in the vehicle, the EV market is alive and well,” says Kia’s director of marketing and communications Robert Staffieri. “And given the capabilities of the Soul EV, it is sure to be a success for us.”

Soul EV officially went on sale here on Oct. 27. It comes as no surprise the initial retail footprint is composed of stores in Vancouver, Toronto, Ottawa, Montreal and Quebec City.

Staffieri notes these stores were selected thanks to a mix of strategic geographical locations, dealership capacity and higher EV traffic areas.

Similar to the strategy Kia employed with its premium dealer network, which retails Cadenza and K900, Soul EV will have a “distinguished look in the dealership” driven mainly by the point of sale material.

That includes a standee complete with LED lighting to grab the consumers’ attention and the addition of the hamster personalities from the successful television campaign run both in the U.S. and Canada.

Dealerships have also had to install two charging stations – one inside and one outside. Staffieri says he could not reveal the costs to individual dealerships to comply with the EV retail requirements. He notes that prices also would have varied by location.

Getting The Word Out
Pre-marketing started in September and included various magazine ads showcasing style and range. The centerpiece of the campaign included a television commercial featuring Kia’s now famous dancing hamsters. The trio appears as scientists whose experiment to electrify a Soul results in the creation of a sleek electric car and an even sleeker lady hamster.

That messaging has been echoed in social media channels and supported by a Soul EV microsite where consumers can learn more about the vehicle.

The automaker also held a press event for roughly 20 Canadian journalists in California in late September.

And who is Kia targeting? Staffieri says they have a pretty firm idea.

Like most electric vehicle buyers, Soul EV intenders tend to skew male with a higher level of education in a higher income bracket.

“These are early adopters of technology or tech enthusiasts who are looking for a commuter car for either a suburban or urban environment,” he says. “These people are ecoconscious and are seeking economic and environmental benefits in their vehicle.”

Kia says it has the best of both worlds with this unit as it tailors to buyers who like the look and feel of the Soul and performance of an EV.

“You get all the benefits of an electric vehicle plus the style, space, performance, comfort and safety of a Soul,” he adds.

That connection might prove to be a boon for sales as the Soul has been a hot commodity this year. October figures place the urban hatchback up 38 per cent in the month and up 82 per cent over the first 10 months of the year.

Kia’s electric unit offers a slightly longer range (149 km) over the Leaf (120 km) and both units benefit from provincial incentives offered by Ontario and Quebec that help lower the cost by up to $8,500.

Key for any electric vehicle growth strategy will be support from surrounding infrastructure in the markets where it is sold.

Staffieri says the next phase of retail expansion will see the unit move to dealerships in secondary markets as volume and customer demand increase. Of course, it will still have to contend with wrestling this country’s fair share of the supply of the Korean-made vehicle from our neighbours to the south.

Kia’s global office confirmed in May it hoped to sell 5,000 units annually around the world.

The following stores will sell the Soul EV in Canada: