In early September Marietta Rewucki turned the keys to Winnipeg’s Eastern Chrysler Dodge Jeep over to AutoCanada and walked out of the doors of for the last time as president of the long-standing north Winnipeg Chrysler store.

“I am proud of what my family accomplished with the business,” says Rewucki. “We weren’t planning on selling, but Pat Priestner impressed us with the way he approached us, and conducted himself. The biggest factor was their business philosophy towards employees and customers were a good fit with ours.”

Priestner adds that the more than 65-year-old family-owned business is exactly the type of car store that AutoCanada is interested in acquiring. (AutoCanada acquired St. James Volkswagen/Audi, another long-standing family-owned Winnipeg dealership at the beginning of this year.)

“Marietta is a really nice person,” he says. “We got along very well.”

While Rewucki said she is looking forward to the next phase of her life, she leaves Eastern Chrysler with bittersweet feelings. Eastern Chrysler Dodge Jeep was founded in 1946 by her father, Joe, her grandfather, Andrew, and uncle John Gusnoski in Beausejour in eastern Manitoba. The family relocated the store to Winnipeg in 1957. Although Marietta will retire, the Rewucki family still will remain in the auto business as  Marietta's brother Andy and his family own and operate Selkirk Chrysler.

“Dad was in the store every day of his adult life,” she said. “We worked closely together for 40 years. I enjoyed the business, but it’s not the same without him.”

Joe Rewucki passed away just over a year ago.

AutoCanada now operates 32 dealerships across Canada, making the company Canada’s largest multi-location dealer.  Priestner, who grew up in Winnipeg, has been in the industry for 40 years.  He notes that he started as a lot kid in Calgary.  He founded AutoCanada 20 years ago and took the company public seven years ago.

“Chrysler has been a good brand for us,” Priestner says.  (11 of AutoCanada’s stores are Chrysler stores. The company’s flagship store is Crosstown Chrysler Dodge Jeep Ram Fiat in Edmonton.) “Eastern Chrysler has done very well in the Winnipeg market. We think there is potential for future growth here.”

He adds that AutoCanada is always on the lookout for further acquisition opportunities in Winnipeg and elsewhere. 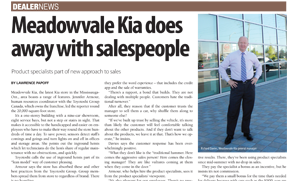 December 11, 2014 The Premier Publications Team Comments Off on Product consultants are salespeople