WINNIPEG, MAN. – With the official opening of Birchwood Credit Solutions’ third Winnipeg location in late June, the Birchwood Auto Group and its president Steve Chipman personally have returned to their roots.

“This is where we began,” said Chipman in his welcoming remarks to about 100 customers and guest at the reception.

“This was my father’s (the late Bob Chipman) first large venture in auto sales. This store was our mother ship. Birchwood Chevrolet was here at 2554 Portage Avenue from 1963 until we moved to our new location at the Pointe West AutoPark in 1999. I got my start washing cars here. All my siblings worked here.”

For Chipman, who was the store’s general manager when the move took place in 1999, this was the first time that he had been back.

And with his return, so came the memories.

He noted that the store had been enlarged. He pointed out the area where Birchwood Chevrolet introduced Canada’s first drive-thru service area and where the customer lounge used to be.

“My dad had a barbershop near the customer lounge,” he recalled.  “Most men kept their hair short back then.”

In the intervening years, the facility had been home to Mercedes-Benz Winnipeg. Two years ago, the Mercedes-Benz store, having outgrown the building, began construction of a new facility and moved into its new store just over a year ago.

“I had always let (Mercedes-Benz Winnipeg president) Brian (Lowes) know we wanted first crack at the building whenever he was ready to move out,” Chipman said.

“Our (Birchwood Credit Solutions) staff of 50 are passionate about helping people with credit problems to get into a good, safe car at a good price and get a leg up on re-establishing their credit rating,” Chipman said.

Jonathan Parker, Birchwood Credit Solutions’ operation manager, reported that sales have grown tremendously over the past five years. The company has been averaging over 100 sales a month over the past seven months, including 115 units sold in June.

Parker anticipates sales of more than 1,000 vehicles over the course of the year between the three locations. The new location, he said, will have about 80 late model vehicles in stock.

“We sell all makes and models, but Hyundai and Kia are particularly in demand because of the longer manufacturers’ warranties,” he explained.

“No other dealership group in Canada provides sub-prime credit at the level of the Birchwood Group,” Chipman said. “Our goal is to help people get into vehicles and, hopefully, they will come back to us a few years later, with their credit ratings restored.” 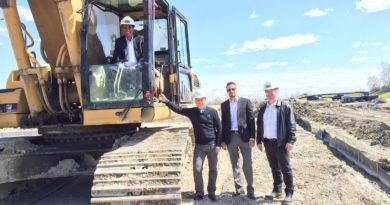 May 24, 2016 Jackson Hayes Comments Off on Shiv Dilawri turns sod on ‘gateway to Ottawa’ dealership

Is there a “new normal” for dealerships?

October 31, 2013 The Premier Publications Team Comments Off on Is there a “new normal” for dealerships?