The study finds that dealers are most satisfied with their lenders when they are assigned a dedicated primary buyer or buying team. Tasked with everything from making a credit decision to restructuring a deal, these frontline lending personnel play an increasingly critical role in shaping the dealer/lender relationship.

“In the current marketplace, the difference between closing a deal and losing a customer to the dealership down the street will frequently be determined by the finance department’s ability to secure the right loan at the right price,” said Jim Houston, senior director of automotive finance at J.D. Power.

“The more adept these financial professionals are at helping dealers address specific challenges along the way, the more business they will ultimately do with that dealer.” 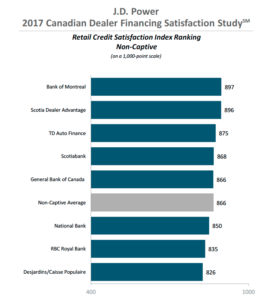 The study, now in its 19th year, has been significantly redesigned to now evaluate auto lenders in two primary categories: captive and non-captive.

The study measures dealer satisfaction with captive finance providers across four factors: application/approval process; relationship; provider offerings; and lease return. The measurement criteria for non-captive lenders are the same, with the exception of the lease return factor.

Key takeaways of the study include:

– Primary underwriting teams affect dealer satisfaction: Dealers who have the highest levels of satisfaction with particular lenders are those who have a primary buyer or buying team assigned specifically to their dealerships. Employing a primary buyer/team structure cultivates a greater intent to send more business to those providers, 10 per cent for captive lenders and 24 per cent for non-captive lenders. 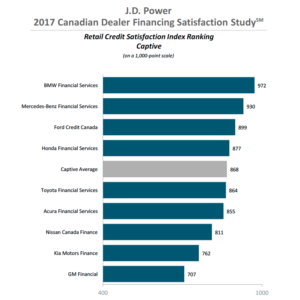 – Lender as problem solver: For both captive and non-captive lenders, dealers overwhelmingly turn to the credit desk as the first point of contact when there is a problem. The most common reasons for contacting the credit desk are credit decision; funding questions; held contracts; stipulations; deal restructuring; program changes/updates; and dealer reserve questions.

– Timing is everything: When it comes to on-site visits by lender sales representatives, dealer satisfaction is highest when lenders visit at the beginning or middle of the month; in the morning; never on a Monday; and for no longer than 30 minutes.

The 2017 Canadian Dealer Financing Satisfaction Study captures approximately 3,750 finance provider evaluations across the two segments from new-vehicle dealerships in Canada. The study was fielded in January-February 2017. 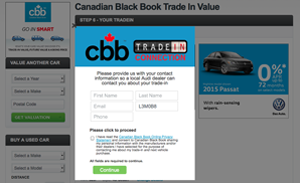 November 26, 2009 The Premier Publications Team Comments Off on F & I profits suffering from cash deals?

Keeping up with the Joneses – literally

January 28, 2013 The Premier Publications Team Comments Off on Keeping up with the Joneses – literally