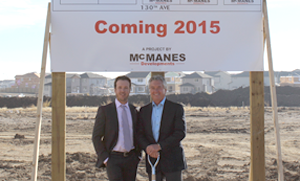 CALGARY, ALTA. – For the McManes Automotive Group, it is a case of finding what you weren’t looking for.

While on the hunt for an eight to 10-acre plot on which to build it’s eighth Chrysler point, the 17-store dealer group instead purchased 32 acres of land in southeast Calgary. With rezoning complete and commitments from three brands, the group has now set about building its own U.S.-styled auto strip in Alberta’s booming auto hub.

“Getting the land and maintaining control by owning the land, developing it and running the stores on it has been the goal and philosophy of the group.”

The land was purchased for an undisclosed “good price” in the fall of 2011. The group had been looking for land for a contentious new Chrysler point in the city. McManes had been embroiled in a battle over the location of a new store that had spurred a court battle with fellow Calgary pentastar dealership, Courtesy Chrysler.

While looking for land at the time, Mike said, the larger plot was available and the group decided to “change plans” and build the huge Chrysler store in addition to four more rooftops on the property.

Municipal rezoning is complete and deep service installation wrapped up this past fall. Once retaining walls are in place, Mike said the shovels should be in the ground by February.

Dubbed the South Trail Auto Mall, the row has commitments from Chrysler, Kia and Hyundai and has “feelers” out to fill the last two spots in the five-store row.

“I’ve never heard a dealer say he built his building too big,” Jim McManes explained when talking about the large footprint. “We’re looking forward to it. It is big, but customers want that type of facility. With the cost of land, it makes sense to add the parking on the roof.”

Mike assured the team will have to “grow into it,” but said it was better to build a store they could grow into rather than grow out of one within three years. While he stopped short of providing an annual volume prediction, he said the plan was to be one of the top volume dealerships in Canada.

Construction is scheduled to start on the Chrysler store in February and is expected to last 18 months. Work will begin on the roughly 50,000-square foot Kia store in March and the equally sized Hyundai point in April or May.

When asked why they chose to undertake such a massive project, both Jim and Mike said they were excited about the challenge and confident in the area and the business plan.

September 10, 2015 The Premier Publications Team Comments Off on Dealership values remain strong in face of consolidation