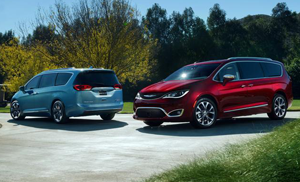 In a market moving further and further from minivans with every monthly sales total, FCA is betting on a new people mover for 2016.

The automaker pulled the wraps off its all-new 2017 Chrysler Pacifica and Pacifica Hybrid. The replacement for the outgoing Chrysler Town & Country is built in the Windsor Assembly Plant and is slated to hit dealerships this spring. The hybrid version is due out in the second half of 2016.

Chrysler Pacifica will be available in four models and the Pacifica Hybrid in two models.

Built from the ground up on an all-new platform, the new unit brings some welcome style to the typically boxy segment. The front fascia is a clear cousin to the Chrysler 200 and a stiffer body structure, says FCA, is the lightest and stiffest in its class making it more responsive with lower levels of body roll.

And while essentially everything else is new, the name isn’t. Pacifica was originally used on a Chrysler SUV that was pulled several years ago.

Sales in the van segment stalled in 2015 with totals dropping 0.9 per cent to 91,893 in Canada. The undisputed king – Dodge Grand Caravan – sold 46,927 of those units. Though the nameplate finished the year down 9.3 per cent it still sold more than 32,000 units than second-place finisher Toyota Sienna. Pacifica will replace the outgoing Town & Country – essentially the top-line Grand Caravan – which accounted for 9,001 in sales down 2.2 per cent.

And while critics and analysts widely appreciated the style of the new model, opinion has been split on the potential success of the vehicle.

“It’s a specialty car. Buyers know it’s a minivan, they know it’s safe, they know it’s for kids - right now no one is buying them, though,” Zo Rahim, analyst at Autotrader says of the Pacifica reveal.

“Today’s consumers are more likely to get an SUV if they want more space, so Chrysler may have a difficult road ahead with this particular product.”

Akshay Anand, analyst at Kelley Blue Book, saw it slightly different saying that with the Chrysler brand desperately needing new product, Pacifica should help endear the brand to people who use their cars as family haulers.

“Furthering the brand portfolio will help Chrysler tremendously in the coming years,” Anand added.
a

February 14, 2010 The Premier Publications Team Comments Off on NADA 2010: on the ground in Orlando