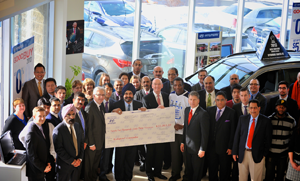 By Chris Clay, Mississauga News
It's been almost 25 years since Nav Bhatia's Mississauga Hyundai was named the top dealership in the country in terms of sales.

However, Bhatia's proud to say that dry spell has come to an end with the announcement Jan. 23, that Mississauga Hyundai is back on top after selling 1,990 vehicles last year, beating out 210 other Hyundai dealerships in Canada for the coveted position of first in sales.

“We did have a very high number of sales; we're very blessed,” said the dealership’s president. “I think we reached first overall in sales because we treat customers the way we want to be treated.”

The dealership has been located in the Erin Mills Auto Super Centre in Mississauga, Ont., for almost three decades, and moved to a larger location there two-and-a-half years ago. The new spot allows for more salespeople and show space and that's helping with sales, he said.

Repeat customers are a big part of their business, he added, with a record of solid customer service bringing customers back over the years to buy and lease.

The dealer also thanked his staff for their efforts.

While the sales numbers are something to crow about, Bhatia is also pleased that his dealership raised the most money out of all the Canadian locations for the Hyundai Hockey Helpers program.

They raised just over $22,000 for the program that gives money to underprivileged children and their families so they can play organized hockey.

It was the second straight year Mississauga Hyundai raised the most money in the country.

“It's very satisfying to help,” he said, noting the funds came from donations from their suppliers and customers.

Now in its second year, the Hyundai Hockey Helpers program has allowed about 4,700 youngsters across the country to play hockey. About 2,800 are playing this season alone thanks to the initiative.