In an economy that has seen wild swings of the stock market, a slumping loonie and plummeting oil prices, dealership values have remained on a steady climb.

Propelled by stratospheric real estate values and a new-car market poised to capture its third consecutive year of record sales, franchise dealers across the country have been cashing in as larger players with deep pockets and access to cheap money continue to consolidate.

But, warns Samir Akhavan, managing partner at Templeton Marsh, these balmy days of high blue-sky multiples will not last forever.

“I know it is a cliché, but what goes up must eventually come down,” he says.

According to Kerrigan Advisors, acquisition activity grew 81 per cent in the U.S. between 2013 and last year with 206 deals up from 114. Of those 206 transactions, 43 were multi-dealership deals.

While there is no definitive source that tracks buy/sells in Canada on an annual basis, activity in 2015 seems to, at least anecdotally, mirror what we saw in 2014.

The industry has seen consolidation both in B and C markets as medium-sized groups grow as well as continued growth of larger dealership groups like AutoCanada, Dilawri and Zanchin.

But with a sagging dollar and the oil patch in bust mode, to what extent will that shape the rest of the year?

“Since historical highs, the value of the Canadian dollar is down 20 per cent, the TSX is down, the price of a barrel of oil is down 60 per cent, yet the value of dealerships is steady. And why is that?” Akhavan asks. “Because people are still buying new cars and dealership groups want to expand and diversify. They can get money for next to nothing from the bank to do it, so why not?”

In a recent conversation, he mentioned a discussion he had with a dealer interested in selling his operation. Some simple number crunching revealed a buyer who borrows 75 per cent of the capital from the bank and purchases at asking price. That buyer would reap an ultimate return on investment of 20 to 22 per cent if they maintained the same performance.

“And, not only that, there was room to significantly improve performance and push his net from about $800,000 a year to $1 million or $1.2 million, which will push the return even higher to 26 or 27 per cent,” he says.

But just how long will these values and profits stay up in the stratosphere?

Templeton Marsh says people saw an opportunity when the market crashed in 2008. Sales and values have been going up ever since with 2015 looking as equally as rosy as the previous two years.

While it is impossible to maintain the momentum in perpetuity, Akhavan estimates dealership values will certain hold the line or increase over the next 18 months – the only caveat being an anticipated slowdown in buy/sells in Alberta as buyers might begin to expect lower prices because of the slowdown.

“The hot brands or the top five – Toyota, Honda, BMW, Mercedes-Benz and Audi – will still fetch the same money they would have a year ago. It is the peripheral brands that will suffer. And also the market, if you are in a B or C market it will be harder than in Calgary or Edmonton,” he says.

Either way, the broker expects to have a very busy third and fourth quarter of this year as buyers around the country work to establish platforms for long-term growth. 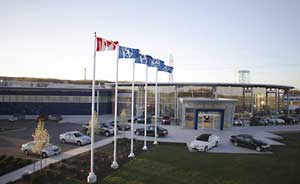 Garden Motorcar Burlington aims to turn the ‘mundane into the memorable’

June 11, 2010 The Premier Publications Team Comments Off on Garden Motorcar Burlington aims to turn the ‘mundane into the memorable’