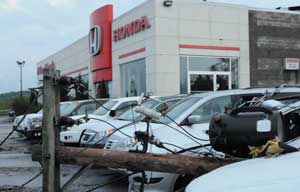 Anna Dalzell works at Tom Smith Chevrolet and says the dealership building is secure but there is a lot of debris and some damage to vehicles on the lot.

But while the staff at her shop takes inventory of the damage, she says Midland Honda just down the road faired much worse.

News reports from Simcoe.com quoted dealership staff in the building during the storm describing the noise as sounding “like a train.”

“You can look up and see the sky from inside,” salesman Bob Sture told reporters, noting huge chunks off the roof have been peeled off.

Richard Davies, the dealership’s new general manager said Mother Nature provided him with quite a welcome to Midland.

“For about 20 seconds, we thought the building was going,” he said, adding he and his employees have now gone through one heck of a bonding experience.

“I would say 90 to 100-per cent of the vehicles on their lot have had their windows blown out and there’s an electrical transformer on some of the vehicles,” Dalzell told Canadian AutoWorld this morning, describing the scene at the Honda shop down the road. “It’s bad.”

She said the damage in the area is “random” with some buildings spared while others were devastated.

“King Street is shut down and it is hard to see anything. There is an Ideal Supply and a local shop that sells hockey equipment across the road from us and they are devastated as well.” 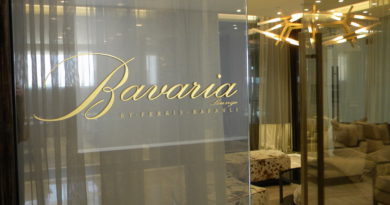 Violations of OMVIC Code of Ethics and the MVDA cost dealer $7,000

January 12, 2015 The Premier Publications Team Comments Off on Violations of OMVIC Code of Ethics and the MVDA cost dealer $7,000