Dubbed DigiLOT, the unit is a 3.5-metre-tall tower assists the automotive marketing and sales teams to easily and quickly engage their customers in the most neglected space on a dealership – the lot.

It offered videos, content and information about the new DB11 as well as information on Aston Martin Toronto dealer Grand Touring Automobiles, directly to smartphones and tablets through Wi-Fi and near-field communication – a function of simply tapping one’s phone at the DigiLOT.

The company said DigiLOT’s ultimate function is to work 24/7 outdoors on dealership lots.

George Dion, CEO of the Future Retail Group, said the stand would work in all conditions to assist sales personnel and car buyers and extend the car buying experience beyond normal working hours.

“DigiLOTs work 24/7 in these previously underused spaces to provide the dealership’s messages and applications to specifically target car buyers, and engage them in two-way conversations on their drive-bys or walk-abouts, even when they’re doing it outside dealership business hours,” he said.

Dion did not share pricing information saying instead that it would vary depending on quantity, content and other factors.

He said this is the second-generation unit after launching an indoor version that were used at some dealerships in Oakville, Ont.

The outdoor unit debuted at CIAS and is built for use outdoors. He said it can withstand all temperatures and weather conditions. It weighs over 1,500 lb. 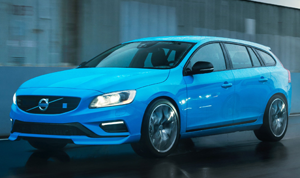 Volvo looks for sales online with 2016 S60 and V60 Polestars

June 19, 2015 The Premier Publications Team Comments Off on Volvo looks for sales online with 2016 S60 and V60 Polestars