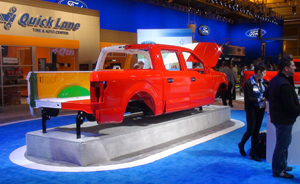 NEW ORLEANS, LA. – The centerpiece of Ford’s sprawling booth at the 2014 installment of the National Automobile Dealers’ Association convention and expo was a colour-coded frame and body of the 2015 F-150.

And while dealers got a chance to touch and feel the changes made to their best selling product, the team at Rotunda, Ford’s tool supply unit, was stationed nearby to explain just how much it would cost to buy the specialized tools and equipment needed to fix the new pickup.

Reps from Ford of Canada said it could cost anywhere from $30,000 to $50,000 for a dealership or body shop to become aluminum certified – meaning it could repair damage to aluminum either on the new F-150 or other vehicles with aluminum bodies.
In an effort to ease the sting of that bill, though, Ford of Canada confirmed to it was following suit with its U.S. counterparts and offering a 20 per cent rebate on qualifying Rotunda equipment purchases for all enrolled Ford and Lincoln dealerships.

The idea, said the automaker, is to have the network ready to handle repairs by the time the new unit launches sometime in the Q4 of this year. MSRP for the 2015 truck has not been released. U.S. marketing reps said Ford planned to retail the pickup for “roughly” the same as the outgoing model.

Blue Oval executives have stressed the new model will be up to 700 pounds lighter, though it has not confirmed how much of that weight loss comes courtesy of the addition of aluminum. Regardless, some analysts have pointed out that aluminum can cost more than steel and, with 97 per cent of the body now composed of the pricier metal, some have wondered those costs might be passed on to consumers.

Pete Reyes, F-150 chief engineer, told The Associated Press that Ford expects to make up the premium by reducing its recycling costs.
As for wooing loyal truck buyers, the automaker said the fact the new model would tow more, haul more, accelerate quicker and stop shorter will make it tough to compete with.

At NADA, the automaker had a large display of the specialized tools and necessary equipment. Rotunda reps were also on hand to answering questions related to the certification process.

One Rotunda rep said the equipment runs the gamut from dedicated welding guns to hand tools to air-filtration system and vacuums designed to suck up aluminum dust.

“You can’t mix aluminum dust and steel dust,” the Rotunda rep said, “and you can’t have an aluminum repair next to a steel repair. They are two dissimilar metals and it will cause galvanic corrosion meaning the repair will fail.”

“That system will hook up to their sanders and will extract the aluminum dust and draw it through water where it settles.”

Sanding and grinding operations are of particular concern as aluminum dust can be explosive. The service official, who asked to remain anonymous, said if aluminum dust mixes with steel dust under the right conditions it could form an explosive compound called thermite.

Jim Farley, V-P of global marketing, sales and service and Lincoln, spoke following Ford’s dealer meeting during the convention and noted the new truck employs a more modular front structure that would cut down on repair time.

The same repair-friendly logic, he continued, was applied to the truck’s A-, B-, and C-pillars. 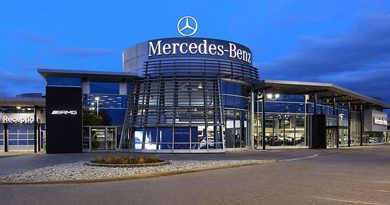