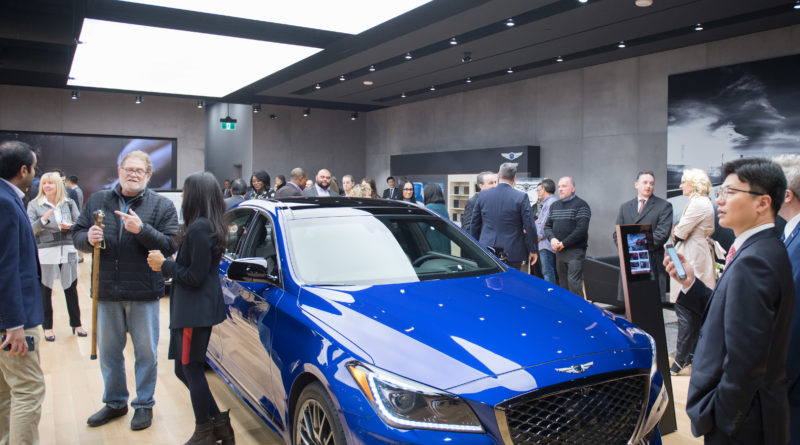 MISSISSAUGA, ONT. – Mississauga’s Square One shopping centre could practically double as an auto mall. The sprawling facility just west of Toronto has played host to a handful of automotive retail pilots in recent years as automakers continue to test different ideas and concepts.

Toyota kicked off its Towards Tomorrow brand store there a few years ago while Porsche is a current resident with Fascination Porsche – a storefront offering merchandise and a driver’s selection boutique running in conjunction with Toronto’s Downtown Porsche.

Now the large mall has a new and long-term automotive resident with the recent opening of Canada’s newest automotive boutique, Genesis Mississauga. Owned by local Hyundai dealer Nav Bahtia, the storefront is the latest proof that Genesis likes to do things differently.

The boutique is 4,010 square feet with room for four vehicles. The sleek, modern-looking space includes a lounge, refreshment area, colour and material samples, two sales workstations and the usual back-of-house facilities including a back office, restroom and storage.

According to Patrick Danielson, manager of product strategy and PR for Genesis Canada, test drives will be available on-site with four reserved underground parking spots.

“The environment itself is designed to be clean and simple, with concrete wall panels, bright hardwood floors and large lightboxes above the vehicles themselves,” he said.

“All of this is intended to place the focus on what matters: Our world-class luxury vehicles.”

The final cost of the project was not revealed.

Square One, like the locations for other Genesis boutiques, was chosen because it’s a high-traffic retail centre (figures provided by the OEM suggest it is the second busiest mall in Canada).

“Physical retail locations are the third element of our omni-channel business model, alongside our online sales platform and at-home service,” he said. “With these new facilities, we hope to prioritize ease-of-access for customers while giving a large number of Canadians the opportunity to experience our brand for the first time. The location in Square One serves both of these objectives well.”

This latest retail point, which joins dealer Shahin Alizadeh’s Downtown Genesis in Toronto as the only physical stores for the brand in Canada, opened roughly a month after Genesis reported its first full-year of sales. Genesis sold 525 units sold in 2017. Danielson classified that performance as “exactly in line with our expectations” and noted they were quite happy with the result.

While that tally pales in comparison to the U.S. performance of more than 20,000 cars sold over the same period, a little context is necessary. Any comparisons between markets would be flawed as they operate with different business models. Though Genesis Motors America recently announced it would develop a retail network of roughly 100 standalone stores in key markets, the luxury line was and remains to be sold at roughly 350 locations inside existing Hyundai stores.

There is further growth coming here as Danielson confirmed the automaker would open two additional boutiques in the Montreal area this spring. The first will be Genesis Laval, located in Carrefour Laval.

The second will be Genesis Centre-Ville in the Griffintown neighbourhood of Montreal. The former is a mall installation very similar to Genesis Mississauga and the latter is located in the urban core at the base of a condo tower, similar to Genesis Downtown in Toronto.

December 4, 2015 The Premier Publications Team Comments Off on Modest sales growth expected for 2016

Toyoda to appear at U.S. hearings

February 19, 2010 The Premier Publications Team Comments Off on Toyoda to appear at U.S. hearings