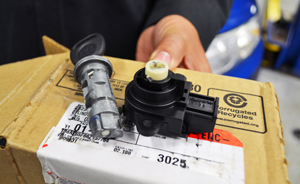 A final report on the General Motors’ ignition switch scandal revealed the automaker paid $594 million to settle claims by victims and family members killed or injured by the technical flaw hidden by some employees of the company for years.

Bloomberg News reports the financial tally was less than what the automaker told investors it was expecting to pay.

The final report, issued by investigator Kenneth Feinberg on Dec. 10, reveals the team “reviewed, evaluated, and resolved 4,343 claims and determined that 399 claims were eligible for compensation from the program.”

The automaker established the fund to provide what the report called “swift compensation” to eligible individual claimants.

Feinberg’s findings concluded 124 people died and another 275 people suffered injuries warranting compensation as a result of the faulty ignition switch.

More than 2.5 million vehicles were recalled when the defect came to light near the start of 2015. The problem rest with an ignition switch that could be jarred into the “accessory” position, shutting off the engine, disabling power steering and brakes and preventing air bags from deploying.

Investigations revealed that several GM engineers and lawyers were aware of the defect for years prior to a recall being issued.

“We faced the ignition switch issue with integrity, dignity and a clear determination to do the right thing both in the short and long term,” Jim Cain, a GM spokesman said in a statement. “The settlement facility is just one example. It was fair, compassionate, generous and non-adversarial.”

In an odd twist, the financial difficulties experienced during the Great Recession actually helped the company in this instance. The automaker was partially shielded from liability after U.S. bankruptcy Judge Robert Gerber ruled in mid-April that a liability shield listed as a condition of GM's exit from bankruptcy protection five years ago remained in place.

While reports at the time suggested the automaker could still face claims related to loss of value in cars made before 2009, Gerber’s ruling means it will not have to fight dozens of lawsuits launched in American courts accusing it of concealing the switch defect that eventually resulted in the recall of millions of vehicles.