Roughly 40 U.S. FCA dealers have signed up for an optional facility program that will see the Jeep brand move to its own stand-alone dealerships.

According to staff working at FCA’s booth at the 2017 NADA Convention and Expo in late January, U.S. dealers were told of the program roughly six months ago and several dozen retailers have signed up.

Pollard Jeep in Boulder, Co., is the first example of the program on U.S. soil. The roughly 28,000-squar

e foot store recently opened its doors, though news of the new look appears to have gone somewhat under the radar.

The look both inside and out is clean and modern. A promotional video supplied to Canadian AutoWorld shows a mostly dark coloured exterior façade accented by lighter brown sections. The brown tone is brought inside as an uncluttered and transparent showroom gives way to a modern lounge area and office space.

The video also shows a two-lane service drive thru.

Steve Corle, dealership facilities and interior branding manager at FCA, said the program is loosely based on a similar facility standard in Brazil. That South American market has had Jeep stand-alones for two to three years, he said, adding that the automaker sought to duplicate elements of the concept in America.

Brazil is also home to some Jeep production with a massive plant in Pernambuco now capable of producing up to 250,000 Jeep Renegades annually.

Corle said he couldn’t reveal where the roughly 40 initial hand-raisers are located other than to say they were in strong Jeep markets.

Staff at the booth who asked not to be identified said the hope is the Jeep-only dealerships would drive volume and raise awareness for what is already one of North America’s most storied brands.

Costs for the program were not revealed.

LouAnn Gosselin of FCA Canada said there were no plans to separate Jeep from its current dealership branding in Canada. Currently, most FCA dealers here retail some variation of Dodge, Chrysler, Jeep, Fiat and Ram with a small number of separate facilities for Maserati and Alfa Romeo and a number of stand-alone Fiat stores.

News of the Jeep plan coincided with word FCA was looking to add up to 400 new dealerships in the U.S. in the coming years. Sources with knowledge of the strategy told media outlets the move was an effort to earn more market share and stem the tide of slowing sales.

It was a similar story on both sides of the border for FCA last year with the Canadian operations riding an 11 per cent decline in December to a full-year drop of four per cent in 2016. FCA Canada retailed 278,729 units, which was still enough to secure second place in overall volume behind only Ford.

The automaker has a network of roughly 2,500 dealerships in America already. It is unclear if the additional Jeep stand-alone stores are included in the push for 400 new points. 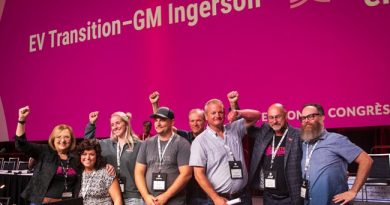 April 8, 2014 The Premier Publications Team Comments Off on Grading NADAP