TORONTO, ONT. -- Ahead of its street date of summer 2011, McLaren automotive pulled the wraps off its MP4-12C at an event in Toronto Tuesday afternoon.

Marking its official foray into Canada, representatives from the car maker along with the man tasked with offering the hot product north of the border, Chirs Pfaff of the Pfaff Automotive, addressed the media about introducing McLaren to Canada and the world of consumer sports cars.

“We are very excited to be here in Toronto,” said Tony Joseph, director of North American operations for McLaren. “We have discussed a vision of competitive expansion; one with lower volumes and higher standards.”

McLaren representatives said the plan for expansion into the North American consumer market includes nine dealers scattered throughout the U.S. and the one Canadian dealership under the Pfaff umbrella set to open in Woodbridge, On.

In an interview with Canadian AutoWorld, Pfaff said the auto group was in the midst of renovating an old Saturn dealership now to act as the standalone McLaren shop when it launches next summer.

With lots of buzz around the product and upwards of 30 strong Canadian leads, Pfaff said he was excited at the thought of being the only vendor for one of the most exclusive sports cars in Canada.

“I’m fully confident with what we are going to do with this product,” he says, adding there will be a dedicated sales staff and technician.

Pricing information has not been released.

Check out the next edition of Canadian AutoWorld for a bigger look into McLaren operations in Canada. 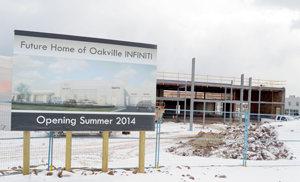