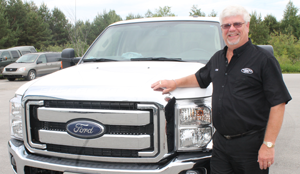 MEAFORD, ONT. – One of Meaford's longest serving and most successful business people – Tom Bumstead – is calling it a career on Friday, June 27.

Bumstead will officially retire on that date and step down from his position at Peninsula Ford (formerly known as Bumstead Ford), the car dealership just outside of Meaford that he once owned. His father Don Bumstead started the business in 1949.

“I've been doing it full-time for 40 years now and I did it part-time for my father five years before that. I thought it was time,” Bumstead said. “It went by quick. I started right out of high school.”

Bumstead has had a remarkable career at the family business. He started out working for his father Don, he proceeded to buy the business with his brother Dave and eventually owned it solely before selling to Peninsula Ford eight years ago.

He has been in sales at the business most of the time, but he also worked in the mechanic shop and serviced snowmobiles when the business sold.

In addition, for 25-years he was the accountant for the dealership and made Ford's accountant honour role.

“When I owned the business we had 18 employees. That's pretty significant in a small town,” Bumstead recalled.

The business originally started in town, became a Ford dealership in 1953 and moved out to the highway location in 1965. Over the years additions were made that grew the size of the business.

“I've always enjoyed it. Like any business it has its ups and downs. It's a very rewarding business and I think the most fun was meeting all the different people,” he said.

He is retiring from the day-to-day operations at the dealership, but he still will be around to make the occasional sale.

“I have several long-time customers that I will continue to look after,” he said.

“I cannot remember when a Bumstead was not selling a Ford product in Meaford. My family, including myself, has taken advantage of your business for many years. We thank you for your dedication to serving Meaford and providing a product that we all need,” said Richardson.

November 25, 2010 The Premier Publications Team Comments Off on PIN reports on Mazda2