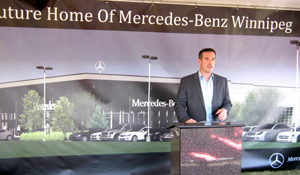 The dealership, owned by president Brian Lowes and his partners Bruce and Doug Danylchuk, officially broke ground on May 9 on the south Winnipeg lot.

“We are very excited about this next chapter in our company’s history,” Lowes said, adding that almost as soon as he joined the Danylchuk family in partnership in early 2008, they knew that we would need a larger facility.

The present store sits on the corner of Portage Ave. and Moray St. and measures just 19,000 square feet. With space already at a premium for inventory and customer parking, he noted how excited the team is to be moving to a fast growing part of the city.

“We’re a destination store and this new store will make a big difference both for our customers and our staff. Our staff will be better able to establish meaningful connections with our customers.”

Lowes said that the dealership’s growth, much like the brand on the national level, has been “astounding.”

Store management said they expect to sell 600 models this year and upwards of 1,000 units for 2015. That pace is expected to accelerate over the next five to 10 years.

In his remarks at the groundbreaking, Mercedes-Benz Canada president Tim Reuss noted the city is a fast growing market for Mercedes-Benz products.

“We are happy that Brian, Doug and Bruce are making this commitment to expand and grow,” he said.

“The new store is being built with sustainability at top of mind,” Reuss added. “It will be an open concept with a lot of windows. The new building will be energy efficient in terms of lighting, water usage and heating.”

The new facility is scheduled to be open for business on April 1, 2015. Costs for the project were not revealed.

October 18, 2010 The Premier Publications Team Comments Off on Audi A4 sedan is attracting a 'somewhat older typical buyer' : JD Power

March 12, 2015 The Premier Publications Team Comments Off on Improving customer experience our number one priority: Mercedes-Benz