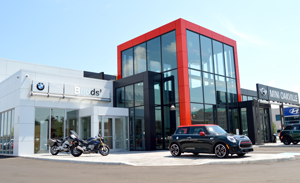 OAKVILLE, ONT. – Even with the funky colours, bungee-cord partitions, massage chairs and red car slung upside down and clinging to the ceiling, the new Oakville MINI location is a lot like every other MINI retailer in Canada.

Turn left as you walk in the front doors, however, and you will see exactly why the dealership is truly one of a kind in this country.

Oakville MINI, owned by the Budds’ Group of Companies and located roughly 45 km west of Toronto, is the only point in Canada paired with BMW’s Motorrad motorcycle line.

After opening its doors for business in late July, Canadian AutoWorld was given a guided tour of the unique store.

Though construction issues and related delays had the approximately $6 million project wrap roughly a year later than first proposed, dealer principal Darryl Budd says that with the new product coming from MINI, the timing ended up being perfect.

“All good things take time and I am really pleased with how it came out,” he said. “It is exciting. And you should see the bathrooms.”

It Starts With MINI
Like every MINI standalone store, the Oakville location is fun, hip and the antithesis of what a dealership would have looked like 20 years ago.

Prior to moving to its new home, the operations shared a building with Budds’ BMW one lot over.

New CI requirements from both MINI and BMW forced the group’s hand and it broke ground on what was a vacant lot between their Subaru store and a Hyundai point late last August. The group had owned the land for 14 years.

Brent Moss, Oakville MINI and Motorrad sales manager, says the particularly brutal winter delayed construction for months but it has been smooth sailing with Baycity Construction once the foundation was poured.

At launch, there were 10 cars in the showroom with space for 14 total. The standard MINI CI elements of funky accent colours and bungee cord partitions divide up the open floor space.

A delivery pod is up front and a heated service drive-thru is on the south side of the building.

One customer wait area sits on the north side near the back offices and another is positioned on the south side. The latter is outfitted with massage chairs and will no-doubt be a popular spot for customers waiting for service.

You can’t help but notice that every MINI in the showroom has a heart-shaped tag hanging from the driver’s side door handle.

David Chisholm, Budds’ Group marketing manager, explains the tags are part of the My New MINI program the company created to coincide with the new store.

Each vehicle is given name and a birthday.

“When the car goes out with the customer, they are adopting the car into the family,” Chisholm says. “It is a little more personalized and unique. One thing MINI customers do is name their cars so we thought we would have fun with it.”

What stand out in the service area are the brightly coloured toolboxes courtesy of Rousseau that fit perfectly with the store and the brand.

Particular attention was also spent making the bathrooms fun and unique. The men’s room has sleek finishes and a television integrated into the mirror; women are treated to velour wallpaper, hip colours and high-end accents.

Bike Time
The north side of the building is home to the rectangular Motorrad showroom. Much smaller than the car showroom, it is home to roughly 15 bikes and is outfitted with workstations and colours that are far more muted than its MINI counterpart.

Norm Wells, director of Motorrad in Canada, says this is the first and only MINI/Motorrad combination in the country. While there are similar examples in other markets around the world, there are no plans for any further joint projects here.

“As the BMW brand has expanded tremendously including the i project, there was no longer sufficient room for Motorrad in the main store,” he explains. “MINI required a new building to meet the growth and new CI so it made sense to build one building for both.”

There is a defined separation between the two brands inside the store so the showroom and ownership experience will remain unique to each brand.

Upstairs and overlooking the Motorrad sales floor is a shop with apparel and bike gear. Down the hall is a boardroom, staff change room, parts storage and additional office space.

Targets and Timing
Adam Shaver, director of MINI in Canada, says the brand currently has 30 retailers.

“While volume is growing quickly, network growth plans are focused on expanding existing stores and ensuring MINI customers are presented with a dedicated/exclusive MINI experience,” he says.

Driving some of that volume will be new product set to open doors for MINI in Canada.

Next year will see the addition of a new cabriolet version, a new Countryman towards the end of the year and a new Clubman. The latter – being wider, longer and lower than the Countryman – will push the brand to a place never before seen: the compact car segment.

“The compact car market, which we have never been in before, is five times larger than sub-compact,” Budds’ says.

He adds that the new store and new product opening up a larger marketplace, Oakville MINI will likely double its sales. “That’s why I wasn’t upset with the delay. The timing worked perfectly.”

A grand opening is planned for sometime in late September.

May 2, 2011 The Premier Publications Team Comments Off on BMW of Mississauga reopens