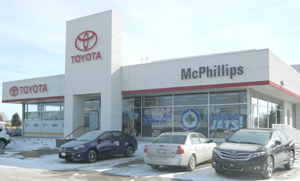 WINNIPEG, MAN. – Construction is just getting underway on a new store for north Winnipeg fixture, McPhillips Toyota. The new, larger facility is located on the adjoining lot just to the north of the existing building.

“When we took over this store about 15 years ago, we were selling about 300 new units a year. Our business is growing steadily every year. Now, we sell about 1,000 new units and 400 to 500 used-vehicles a year.”

He reports that the store has been around since the mid-1980s.

Originally called Carter Toyota, the store was acquired in 1996 by Cornwall’s father, Jim (who is the president), in partnership with Jim Gauthier.

The Cornwall Family has been the sole owner for the past 15 years or so.

Cornwall notes that he and his staff spoke with long-time customers before determining where to build a larger store.

“A lot of our customers are close by and it was more convenient for them if we just build where we are,” he says.

The new structure will be 30,000 square feet compared to 13,000 square feet for the existing building. It will boast a 13-car showroom with a larger customer lounge and children’s play area. The back end will have 14 service stalls, four wash bays, a truck delivery area and a six-car drive thru.

“We will need to add more staff, mainly in service,” Cornwall confirms, adding that all the furniture and most of the equipment will be brand new.

There will also be more customer parking.

The new store is scheduled to be completed in just over a year. Once operational, the present store will be demolished to create more space for cars and easier access for customers.

May 3, 2016 Jackson Hayes Comments Off on Birchwood BMW named best in the West

November 24, 2010 The Premier Publications Team Comments Off on 2012 Mazda5 to hit Canadian showrooms in early January