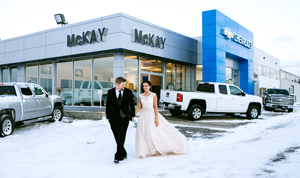 THOMPSON, MAN. – After a six-month renovation, the northern-most dealership in Manitoba is fully imaged.

“My sales team moved into 10 by 20-foot trailer off-site at the beginning of June and didn’t get back until September,” he says, noting how glad the team is to be back under one roof.

The $600,000 project was the third corporate image McKay has paid for since Randy’s brother Bryne McKay started the dealership in 1986. They had previously completed General Motors’ Image 2000 program in 2001.

Located in chilly Thompson, Man., the dealer says his staff and the town endure some pretty unique weather conditions. As a northern hub servicing First Nation’s and those travelling on to Churchill, the town is a place renowned for cold weather testing.

A slew of major companies from a variety of industries have commissioned product testing over the years including Rolls-Royce Canada, Pratt & Whitney along with a handful of automakers.

“Usually Thomson is always about 10 degrees colder than the surrounding areas,” he says. “If we’re not cold, no body is cold.”

The 15,000 square foot dealership retails roughly 350 new and used vehicles annually. The majority of that volume is trucks and SUVs. Construction was handled by Concord Projects, which does swift business with dealerships throughout Manitoba.

No square footage was added during the reno as McKay says most of the work centered on the exterior. The GM tower was taken down and replaced by the bright blue Chevrolet portal.

Surprisingly, GTA-based Cladco handled the exterior cladding for the project – despite the fact Thompson is located about 3,000 km away from the Burlington, Ont. company.

Though he wishes he could have sourced more local trades, he is happy he went with experience.

“I was glad I hired a contractor with experience in the GM program. It made my life a lot easier. I didn’t have to worry about the minor GM demands as the contractor took care of it for me.”

Perhaps most importantly, the renovation was complete in time to provide a backdrop for his daughter’s wedding photographer. The Nov. 8 nuptials saw the bride and groom stop by the store to take pictures in the fresh layer of early season snow.

November 6, 2012 The Premier Publications Team Comments Off on Business as usual: Suzuki Canada