For all the dealers publishing the Retire Your Ride bonus on trade ins, set your calendars as the program will come to an end in exactly six months.

Set to stop officially on March 31, the auto-recycling program instituted by the federal government has enjoyed some rather staggering success since early 2009.

Up to the end of last June over 89,000 older vehicles have been accepted into the program with over 78,000 being permanently retired at 330 participating recyclers.

According to numbers posted online, this recycling has kept as much as 5,100 tons of smog forming emissions from entering the atmosphere.

Many dealers across the country have been advertising the financial aspects of the program – $300 cash or a rebate on the purchase of a 2004 and/or newer vehicle – and should note that it will wrap up on Mar. 31, 2011.

Retire Your Ride is a national program designed to effectively and efficiently retire 1995 model year or older vehicles in an environmentally responsible manner, in an effort to improve air quality.

The Retire Your Ride program is delivered nationally by Summerhill Impact, funded by the Government of Canada and supported by a network of experienced regional delivery agents across the country, as well as a national network of automotive recyclers.

NADA floor space sold out ahead of 2013 convention and expo

December 6, 2012 The Premier Publications Team Comments Off on NADA floor space sold out ahead of 2013 convention and expo 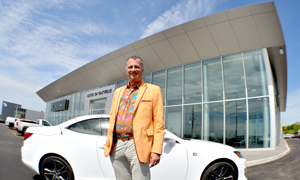 Focus on the fine touches

June 5, 2014 The Premier Publications Team Comments Off on Focus on the fine touches