RED DEER, ALTA. – For Garrett Scott, this is about legacy.

It would have been far easier for Scott and the Scottsville Auto Group to build a traditional facility for its Subaru franchise in the north end of Red Deer, Alta. Putting up a “normal” dealership would have cost less, required less work, induced fewer headaches and probably been done by now.

But building a regular dealership would have made Scott Subaru just another Subaru store; what his team is constructing instead will likely be the only one of its kind in the entire world.

“As an Albertan, I think we get a bad rap because of our reputation and track record when it comes to the environment. I like to think building this in Red Deer is an important statement to the industry and the country,” Garrett Scott told Canadian AutoWorld.

“I don’t consider myself an avid environmentalist, but I know there are better ways to design and construct buildings. As an industry, we should look at all of these options before just automatically going with whatever has been done before.”

Scott and his team are roughly halfway through building what will likely be the only passive house (from the German term passivhaus) automobile dealership in the world.
Passive house is a rigorous standard for energy efficiency that aims to reducing a building’s total ecological footprint. Through design and construction, these buildings require very little energy for things like heating and cooling.

According to the Passivhaus Institut, certified buildings must be designed to have an annual heating and cooling demand of no more than 15 kWh/m2 per year or be designed with a peak heat load of 10 W/m2.

In addition to that, total primary energy (source energy for electricity, etc.) consumption must not exceed 60 kWh/m2 per year.

Certified buildings must not leak more air than 0.6 times the volume per hour, or alternatively, when looked at the surface area of the enclosure, the leakage rate must be less than 0.05 cubic feet per minute.

Scott summed up the standard he is shooting for in far more understandable terms: “Our 15,000-square foot building will essentially have an area for air to get out that is smaller than a hockey puck; that’s the total exposure of the building. There is almost no air getting in our out, minus what comes in through the doors.”

To put that in perspective, experts estimate all the gaps in a small house – around the windows, doors, foundation, attic space, etc. – are equal to a hole the size of a basketball.
So stringent are the passive house requirements that of the uncountable billions of buildings in the world, it is estimated that fewer than 25,000 are certified passive house structures.

Best Laid Plans
The Scottsville Group, which has been operating in Central Alberta since 1968, is comprised of Kipp Scott GMC Cadillac Buick, Gord Scott Nissan and Scott Subaru.
Scott said they spent two years planning the project and had input from the Passivhaus Institut out of Germany. He said these types of builds are usually reserved for residential use and that many questions arose related to the normal use of the dealership.

The dealership group has partnered with Sublime Design Studio, Cover Architectural Collaborative and the Peel Passive House Consulting to help design and execute the project.

Ground was broken in October and he hopes to complete construction sometime this fall.

At just under 15,000 square feet, the list of unique qualities on this one-of-a-kind project starts with the walls. The exterior walls are composed of three layers and are two feet thick. The outer layer is a breathable membrane that takes moisture out of the building while the second is thick, non-breathable layer aimed at separating the exterior temperatures from the inside.

There is a collection and redistribution system for rainwater and snow melt and Scott said they are still looking at the potential of installing solar panels on the roof.
Sitting on just over two acres of land, Scott Subaru is using porous concrete for the parking lot that will have a moss bed underneath to help collect and hold water.

“It’ll look a little weird in the middle of summer as we’ll have a perfectly green moss bed on our lot, but people can drive on it. It will be a point of differentiation, for sure,” he noted.

The thick walls will combine with expensive glass, thermal reflective blinds and custom doors with specialty frames to provide a very quiet experience inside the building.
Heating the store through Red Deer’s traditionally long and cold winters (the city averages -11 degrees Celsius in February), will be a highly efficient heat pump system used only when the internal passive heat and solar gains are not enough to cover the heating demand in the depths of the winter season.

Scott said the store would have a heat recovery ventilation system that recovers the heat from body heat and the mechanical functions and passes it to the incoming fresh air. An air exchange system will move the air around the building and ensure that no matter where you are in the dealership, it will always have fresh air at a comfortable temperature.

One of the biggest challenges was incorporating service bay doors. Scott said they had to track how many times the bay door went up and down for a whole year and factor those large air exchanges into the modeling.

Assuming everything goes according to plan, the estimated annual cost to heat and cool the 15,000-square foot dealership will be less than $200 a year.
Scott said his bill for the current Subaru facility is roughly 20 times higher.

Bigger Picture
But what does all this cost? The short answer is that it isn’t cheap.

He confirmed his passive house store would cost more than a normal build would have, though an exact final cost won’t be known until the project is complete.

Experts with Cover Architectural Collaborative said this type of construction standard historically carries a 20 per cent premium, though they noted it is yet to be determined how that applies to this project as it is being built as a cost plus contract rather than a stipulated sum contract.

Despite the added cost, the dealer said he’s confident the concept lends itself well to the site, the brand and its customers.

“We were also inspired by the plant in Indiana,” Scott added, referring to the Subaru of Indiana Automotive assembly plant in Lafayette that became the first zero-landfill factory in the U.S.

“We have been to the facility a few times and that really led to us wanting to do a building that is a little different. We wanted to be leaders in Alberta.”
Grant Patterson, manager of dealer development at Subaru Canada, said the company is excited about the project.

“Subaru within Canada and globally works to promote its strong environmental strategy, be it with our production facility in Indiana or with our PZEV technology in our cars,” he said.

“We think it’s a nice commentary to see a retailer take that environmental stewardship to the next level and build a dealership aimed at reduced energy levels, heating costs and include things like rainwater collection.”

Patterson confirmed head office completed a facility review with the dealer to ensure the design still met image guidelines and that they were able to satisfy Subaru’s requirements and the standards for passive house construction.

And while the question of cost did come up, Patterson said it was something the dealer was comfortable with so it wasn’t an issue for the factory.

“I know it would have been easier to not go with this passive house design, but we are thinking long term,” Scott said.

“This is a big year for us as we are also celebrating the 50th anniversary of our GM store in Red Deer. Now with our Subaru project, we’ll have a structure here that will truly be a legacy project that will cost us virtually nothing to heat and cool the building. That’s pretty cool.” 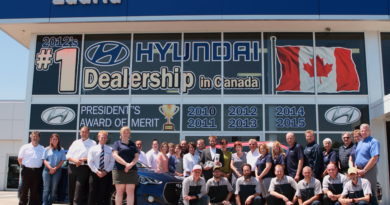