Creating an atmosphere that’s welcoming and attractive to customers is a key step on the road to success for NewRoads Automotive Group.

“I think it is important to remember that personal connection results in strong performance,” said NewRoads CEO Michael Croxon.

“We are working hard to ensure that our stores are environments where today’s customers want to visit and return,” said Croxon, adding that his goal is to create that environment. “The physicality of the locations is one thing, but more importantly is how our associates deal with customers.

“We spend a lot of time talking about and put a lot of energy into creating a place where our associates enjoy coming to work. Their happiness directly impacts the customer experience.”

The NewRoads group started with a Chevrolet Oldsmobile dealership that Michael’s father, Noel, opened in North York, a suburban district in Toronto, back in 1968. While the original store has since been sold, the group now consists of five stores in the Greater Toronto Area – four in Newmarket and one in Richmond Hill.

“We evolved to The NewRoads Automotive Group after a number of acquisitions and seeing the need for an umbrella brand name,” Croxon said. “As we closed one, sold one and acquired others, we adopted the NewRoads name for all of our stores, of which there are five today.”

While the group could add more dealerships, the owner points out that would happen only if the stores “are strategic for our brand geographically.”

The first consideration would be whether a possible acquisition would fit in with the brands in the group, but geography would be a major part of the decision.

During 2017, NewRoads was awarded a Subaru franchise for Newmarket. He said the group sold its Kia franchise in Newmarket and located the Subaru dealership in the renovated former Kia building.

During the past decade, Subaru has seen its sales more than triple across Canada to 55,000 vehicles a year from 16,000.

“We’ve been very fortunate in our timing with Subaru,” said Croxon, pointing to the purchase of a Subaru dealership in Richmond Hill 10 years ago.

However, the backbone of the group remains the General Motors dealership in Newmarket. Croxon said last year was very strong for the automaker.

When NewRoads acquires a dealership, the company has to consider both the store and the employees.

For Croxon, that begins with the process of familiarizing staff with the NewRoads culture. For employees who can’t change and adapt, that may mean leaving the dealership.
In some cases, no staff leave, but in others a lot have left, he said.

One of NewRoads “Four Pillars of Success” is Community (The others being Employee Engagement, Customer Enthusiasm and Performance). Signature events each year include NewRoads Girls Night Out in honour of International Women’s Day, The NewRoads Ride to the Lake and an annual Classic Car Show in support of Big Brothers and Big Sisters.

“While we don’t expect a direct return, we believe that strong communities make for strong businesses within that community and hope that it might influence some to think of us for their automotive needs,” Croxon said.

He said it’s tough to quantify whether the community events help attract customers, “but presumably the more people you touch, the more you have an opportunity to serve. Our events enable us to expose our brand and facility to people we may not see otherwise.”

During Canadian winters, keeping service customers comfortable is a priority. Except for a recently acquired Chrysler store, all of the dealerships have enclosed service drive-thrus.

“We are actually tearing the one at the GM store down and building a new one in the coming months,” he noted.

Included in that renovation is the addition of a quick lube, something that Croxon believes in having when the real estate allows it.

The Croxon family was an innovator with quick lubes, adding one to the original GM dealership in North York during the 1980s and seeing its value as a convenience to customers.

Drive-thrus and quick lubes are part of the process of keeping customers happy.

NewRoads posts CSI scores that are above the average for both the zone and region, Croxon said. “We have a long history of positive CSI.”

In today’s world where many people are pressed for time, NewRoads values the customer’s time whether in the service department or completing a transaction in the showroom. Croxon said that means meeting the dealership’s commitment on how long it will take.

Dealership groups use varying management structures which will determine how many stores one person oversees.

“We have a senior team consisting of myself as CEO, COO Jim Van Dusen and CFO Mike Foley,” he said, adding that there is a general manager for each store. 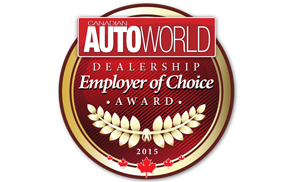 Are you an employer of choice?

October 15, 2015 The Premier Publications Team Comments Off on Are you an employer of choice?