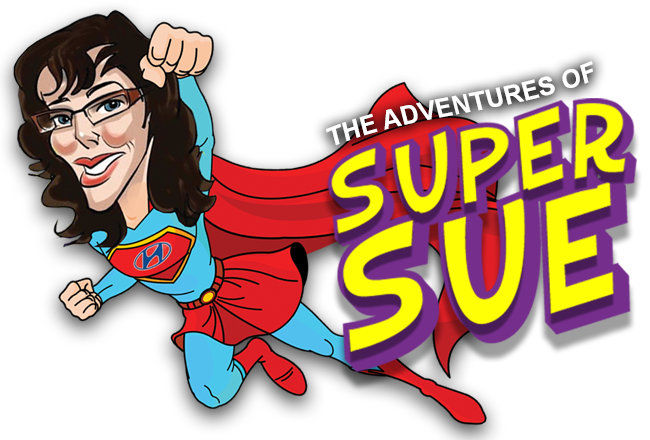 COURTENAY, B.C. – When dealer Mike Finneron and his daughter and store general manager Sue Finneron changed their franchise from the defunct Pontiac brand to Hyundai in 2010, they found there was more to the move than just changing pylons.

“We had to learn how to be an import store,” Sue Finneron recalls.

“We had gone from a three month/5,000 km philosophy in maintenance to six months/6,000 km since cars are better than they used to be. So you aren’t used to seeing your customers as much.”

Add to that Finneron Hyundai is located in Courtenay, B.C., on the east coast of Vancouver Island in the Comox Valley. There’s a population of 24,000 and a trading area of 60,000. It’s pickup truck country. But Hyundai hasn’t a pickup in its lineup.

“It took us a couple of years to learn,’ she said.

One of the moves she made was to get in touch with a marketing company in Florida and work with them for about a year, learning how to market the store.

At one of the sessions, a cartoonist appeared and drew caricatures of all the students in a superhero suit. Finneron liked the look.

“We had to find a way, so I put on my cape and became Super Sue Finneron.” she said. “The name just stuck.”

Super Sue is everywhere. Super Sue greets each shopper at the store’s website where they get an invitation to play the Super Sue Game and win “free stuff!”

Next come the “Adventures of Super Sue,” where the real Sue Finneron introduces herself and the store to the public in a brief video. Then there’s the Super Sue Shootout where customers are invited to “Hit Super Sue three times to win a free voucher!”

Every page on the site has a Super Sue, cape and all.

Finneron went about making herself a personality in the area, hosting a weekly radio show. Show content is mixed, not just auto-focused.

The store also does a variety of charity work and telethons with Super Sue as the rep.

She says that there’s more to it than just attention getting. The store services all makes and offers subprime financing.

“A big part of what we do is subprime. That means customers for life. That’s my dad’s philosophy and mine,” she said. “We are solution providers. We get involved. We find out what the customer needs. We’re not here just to sell them a car.”

People know her. She’s used to being stopped in the grocery store even without the cape. And if they have a problem with their car, they’re not shy about telling her about it then and there.

And that means the store has to stand behind its product.

She credits the store’s 29 employees with being a key part in the store’s success. The turnover is low – one staffer has been there for 35 years; six for over 25 years and more than half have been with the dealership for over 10 years. That means they know the customers.

“We are not a super process store. Big town dealers come to this town and try to do it that way. But one size doesn’t fit all. Different people need different things and being a small town dealer, we can do that.”

The 9,000 square-foot store sells about 550 new and used a year. She says that translates into a 12 per cent market share in her area versus the automaker’s eight per cent share nationwide.

“That’s pretty good because we are just tiny.”

In June, those sales numbers and the high level of customer satisfaction underlying them won the dealership Hyundai’s President’s Award of Merit for being the brand’s top-performing dealer in 2015.