Ontario’s automobile dealer industry generates over 53,000 direct jobs and more than $37-billion in retail sales each year, a study conducted on behalf of the Trillium Automobile Dealers Association suggests.

TADA members – nearly 1,000 franchised, new car dealers across Ontario – directly employ more than 45,000 people and produce $12.15 billion in GDP each year to the province, according to the study by PwC Canada, commissioned by TADA.

They also generate and facilitate 77,554 jobs through direct and indirect means – resulting in over $4.3 billion in labour income through the employment chain.

“When people think of the auto industry, they mainly think of manufacturing jobs,” said TADA president Larry Lantz. “But the auto retail sector should not be overlooked. We provide well-paying jobs across Ontario in diverse fields such as skilled trades, sales, finance and marketing to name a few.”

“For example, the $2.81 billion generated in corporate and personal income tax and taxes on production could pay for building a brand new, fully digital state-of-the-art hospital every year – like the Humber River Hospital in Toronto, which the province allocated up to $2.13 billion to build.”

The study also indicated that between 2001 and 2016, employment at new car dealerships increased by approximately 30 per cent, outpacing the overall increase in Ontario’s retail sector by about five percentage points.

Employment was also a recurring highlight as numbers suggested over 1 in 20 (5.55 per cent) of provincial retail trade jobs are generated by TADA members. New car dealerships also provided an average of $1,012 in weekly earnings – 84 per cent higher compared to earnings in overall retail trade and about nine per cent higher than in the overall service producing industries. 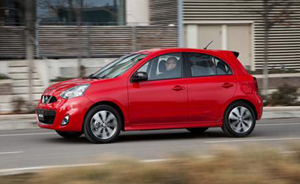 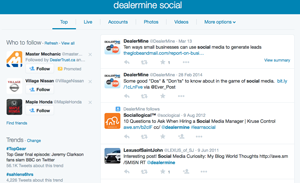 Master the Twitterverse with DealerMine Social

July 3, 2015 The Premier Publications Team Comments Off on Master the Twitterverse with DealerMine Social