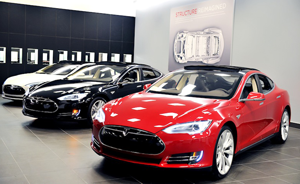 Tesla Motors is growing its footprint in Canada with a new sales and retail location in Toronto and plans for stores in Vancouver and Montreal in 2014.

Tesla said the new 17,000-square-foot facility will allow the automaker to better serve its growing customer base throughout Ontario and expedite the purchase and service of its popular electric units. This move marks the second major Toronto investment for the brand, which opened its first Canadian retail location in Yorkdale mall roughly a year ago.

Since then, operations have grown to include service points in Montreal and Vancouver.

Patrick Jones from Tesla’s communications office said growth north of the border will continue in 2014 with plans for a second retail point in downtown Vancouver being finalized now. The west coast store is set for an early spring opening.

Ahead of that, he said the big news would be the opening of a supercharging network stretching from Quebec City through Toronto and into Detroit. A sister-charging grid is also set to connect Calgary and Vancouver.

“Superchargers provide half a charge in about 20 minutes and are strategically placed to allow owners to drive from station to station with minimal stops.”

There are roughly 40 stations in North America now including a stretch that allows owners to drive from the Seattle area south to the California-Arizona border.

By 2015, Tesla said it hopes to have 98 per cent of the U.S. population and parts of Canada covered by its charging grid.

Model S has a range of 265-miles — the longest range of any production electric vehicle in the world.

Without an internal combustion engine or transmission tunnel, the interior of Model S has more cargo space than any other sedan in its class and includes a second trunk under the hood. The Model S interior features a 17” in-dash touch screen with Internet capabilities, allowing for streaming radio, web browsing and navigation.