OTTAWA, ONT. – With the recession now a memory, the Ontario Dealers’ Association members met in Ottawa on June 28 to ponder the past and look to the future.

The move from leasing – down to five per cent from 55 per cent – to sales opens the door to more profit in the F&I office while the strong loonie keeps U.S. used-car dealers at home and used cars here.

But, he noted, there are concerns: those incentives mean lower margins and longer loan terms – up from 24 to 36 months to as high as 84 – mean dealers won’t be seeing customers as often.

Still, 38 per cent of all the new cars sold in Canada are driven away by Ontario buyers. The province’s workers take home on average $833 a week, second highest (along with Newfoundland and Alberta) in the country. And the province’s population has increased by over 500,000 in the last five years.

“Today, we are standing stronger.”
Check out the August issue of Canadian AutoWorld for a full report on the OADA meeting in Ottawa. 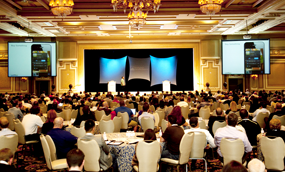 Campagna puts its 3-wheel speedsters on the Ontario market

June 14, 2016 Lawrence Papoff Comments Off on Campagna puts its 3-wheel speedsters on the Ontario market