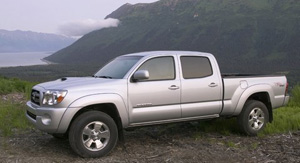 The voluntary safety recall was issued this week to inspect the front drive shaft on certain 2010 Tacoma 4WD trucks.

The company said the front shaft in these vehicles “might include a component that contains cracks that developed during the manufacturing process.”

Apparently, as those vehicles are used, the cracks may eventually lead to the separation of the drive shaft at the joint portion.

The release goes on to say that dealers will be instructed to perform an inspection to identify the specific lot numbers located on the front drive shaft.

“Based upon the inspection results,” officials said, “The front drive shaft may need to be replaced.”

The inspection is estimated to take ten minutes and will be performed at “no cost to the vehicle owner.”

Toyota Canada has also decided to offer modified accelerator pedals for Venza owners affected by a separate safety campaign to replace the genuine Toyota all-weather floor mat purchased as an accessory for the affected model.

The company said it is was amending the “voluntary safety improvement campaign” started last year to provide certain improvements addressing the potential risk of floor mat entrapment due to an incompatible or unsecured driver’s side floor mat.

The safety improvement campaign will now also include certain MY Corolla, MY Matrix and MY Highlander vehicles.

Though no vehicle defect has been identified in the newly expanded population of affected models in Canada, the company says its customers’ “safety and confidence in the quality of Toyota vehicles is of paramount importance to Toyota Canada.”

Wolfe Group keen on being the best, not the biggest

September 15, 2017 Jackson Hayes Comments Off on Wolfe Group keen on being the best, not the biggest