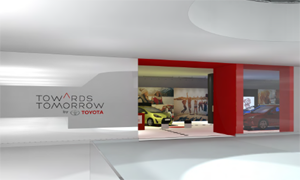 It is called Towards Tomorrow.

Set to officially open March 5 at Mississauga’s Square One Shopping Centre just west of Toronto, the pilot will make Toyota the latest in a string of mainstream OEMs looking to build brand awareness outside the traditional automotive retail model by establishing a presence in a mall.

Cyril Dimitris, V-P of sales for Toyota, says the idea underscores the evolution of consumer engagement in the car-buying process.

“As urbanization trends evolve and as a greater percentage of our buyer base becomes Millennials, we are seeing – apart from different product demands – we are seeing different demands from our customers in what they expect on the path to purchase,” he says.

“Clearly, our customers today are well-educated, using the web and have a greater idea of what they want. They certainly still want to see the vehicle, drive the vehicle and touch the vehicle to make sure it fits. But they want to do that in a pressure-free, non-traditional retail environment.”

The Square One project takes over some of the retail space previously used by big box retailer Target. A sneak peak event is planned for March 2 with an official launch slated for three days later.

The pilot will employ customer service reps as opposed to traditional dealership staff that will help educate visitors about the company and the products. Toyota reps explain the space will also include lifestyle photography, virtual reality simulators and digital painting stations.

Test drives will be available on site and additional vehicles will be showcased at a more traditional display elsewhere in the mall.

Leads generated at the storefront will be submitted into Toyota’s system with potential customers given the choice of the dealer nearest their address.

News of this pilot comes fresh on the heels of Ford’s announcement it would open a series of FordHubs in a few major global markets in the coming months. Prior to that, we have seen a litany of examples in Canada and around the world of OEMs or individual dealers setting up similar operations not next to competitive automotive makes but beside the likes of Lululemon, The Bay and Banana Republic.

Porsche has extended its City Showroom concept to Montreal; Hyundai opened a concept store in a busy mall southwest England that by all accounts has been a huge success.

Siimon Reynolds is a contributor to Forbes and popular mentor to business owners around the world. In a post for the financial magazine he explored the benefits of shopping centre retail locations for dealerships noting one need look no further than Tesla for an example of a winning formula.

“Most cars dealerships would be lucky to get a hundred potential customers perusing the cars on their lot each day. But because of their location, Tesla gets tens of thousands of people walking right past their car, every single day,” he wrote.

He explains that a move like what Toyota plans to pilot is not about driving sales volume but instead getting physically closer to the buying base with the goal of being added to the shopping list.

“However you do it, the idea of going out to your customer in an exciting way has great merit for many businesses, yet other than in the traditional retail world, the strategy is rarely used,” he added.

Dimitris says the Square One pilot will run for three to four months.

There are no concrete plans to expand the concept to another mall in Canada, but he notes the factory has already heard from dealers that have interest in running something similar in other markets.

May 27, 2010 The Premier Publications Team Comments Off on HST no slam dunk

October 20, 2011 The Premier Publications Team Comments Off on NADA questions ROI of imaging