Deprecated: Methods with the same name as their class will not be constructors in a future version of PHP; CMBDWidgetCatWithNumber has a deprecated constructor in /var/www/canadianautoworld.ca/public_html/wp-content/plugins/cm-business-directory-pro/shared/classes/CMBDWidgetCatWithNumber.php on line 3
 Ultimate city car gets a little more luxury – Canadian Auto World 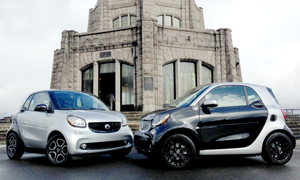 PORTLAND, ORE. – Smart is about to find out just how strong the subcompact appetite is as its totally redesigned fortwo hits a market more convinced than ever that bigger is better.

Safety features include crosswind assist that uses selective braking to keep the microcar on course, and the optional forward collision warning.

And while a cabriolet version is expected to show at Frankfurt in September and an all-electric model is expected “in the lifecycle,” Canada will await certification of the gasoline version in mid-September. Sales will start immediately after.

During the press launch in Portland, Ore., which featured an all-day scavenger hunt to show off maneuverability and parking ease of the city car, smart proved to be a worthy chariot when slipping down side streets and tucking into tight parking spaces.

Unfortunately, that metro mentality is falling further and further behind in North America as buyers continue to move to larger product propelled by lower gas prices and attractive incentives.

Inside and Out
The 2016 fortwo comes in a totally redesigned package. Gone is some of the exterior cuteness (for lack of a more formal automotive design term). In its place is a sharper, even more masculine look thanks to a higher hood, sharper headlights and a noticeably more pronounced badge in the centre grille.

It is much of the same in the rear as new rhombic taillights mirror the front and are framed by the tridion cell.

The length has not changed but the track is 10 cm wider making for more shoulder room inside and improved handling as the wheels are positioned further outwards. Also helping with agility is short overhangs at the front and the rear.

The parent company added a bit of lux to the inside with soft-touch materials and a few borrowed bits from the Mercedes-Benz parts bin.

In keeping with its quirky essence, temperature is controlled through a horizontal slider reminiscent of an old-school radio dial while the fan itself is pure modernity with fan speed marked by bright red lines that encircle the lower control panel.

Above that sits an infotainment centre that sits out from the dash and comes in two varieties. First is a universal smartphone cradle that comes standard on Passion and Prime. Drivers can essentially do exactly what many young people have been craving: integrate their smartphone directly into the car.

The second option is a seven-inch touchscreen that comes standard on prime but is an upgrade on Passion.

Curiously, smart charges $1,395 for the touchscreen package while the cradle, which allows for essentially the same usability, is a $125 option.

Getting Technical
The most important driving feature for the new model would be the completely new transmission, a source of frustration for most smart owners and one of the top complaints corporate received about the tiny subcompact over its first two generations.

“We listen to our customers,” Chris Goczan, national product manager for Mercedes-Benz Canada, says during the media briefing.

Canadian drivers will have a choice between a five-speed manual and a six-speed twinamic automated dual clutch transmission (DCT).

While by no means perfect, the DCT I tested marked a stark improvement over the old version and made for surprisingly smooth highway entrances and steady cruising at higher speeds.

It was occasionally clunky at lower speeds but manual shifting while climbing some steep hills around Portland was downright joyful.

The 0.9 litre three-cylinder gasoline turbo engine is fitted at the rear and has a top speed of 155 km/h.

Smart’s hallmark tridion cell is also back. Made by Magna in a facility next door to the Hambach, France plant where smart fortwo is built, the safety cell is comprise of 72 per cent high-strength steel alloys. As Goczan puts it, the cell surrounds the cabin like a hard shell.

Curb weight is up 111 kg on the new automatic (931 kg compared to 820 kg) and fuel consumption numbers for Canada were not available by press time.

Market Outlook
One of the biggest problems smart has in Canada is one totally out of its control. U.S. adoption of the subcompact – which flirted with 25,000 units just seven years ago –tends to slow when gas prices remain low.

With the drop in oil prices not expected to turn around any time soon, timing is not exactly ideal for the third generation’s relaunch.

Canadian sales mirror that slump with just 66 sold in August and year-to-date sales sitting at 280. That tally marks a 76.4 per cent plummet in retail performance.

While you can chalk some of that up to the fact this is a transition year for fortwo, part of the blame falls on the growing desire amongst North American drivers to pilot large vehicles.

Also hampering Canadian sales success is the lack of the sporty diesel option Europeans enjoy, as the business case does not support offering the model only for Canada.

Competition for smart fortwo is particularly tough to nail down. As a city car adept at weaving around traffic, parking in small spaces and performing breakneck U-turns (turning radius of 6.95 metres), fortwo really has no equal. The closest cross-shop would be Scion iQ and Fiat 500 Pop. The FCA nameplate starts $800 cheaper than the $17,300 base price for the smart pure trim.