On Friday, October 5, customer Brian Lischka pulled into the dealership to pick up his cheque for $50,000 courtesy of the dealership’s most recent Pluck-A-Duck event.

Throughout the month of July and August, anyone who bought a new or used vehicle at Winnipeg Suzuki was entered into to pick out a duck with a special number and a chance at the big prize. The competition was held on September 12th and Lischka’s lucky number was pulled.

“I didn’t expect to win,” says Lischka, a 33-year veteran Manitoba Hydro worker who purchased a 2011 Street Legal dirt bike from the dealership in mid-summer. (Lischka notes that he used to race in motocross events in his younger days.)

“Winning was a nice bonus.”

The Pluck-A-Duck event is one of several ongoing promotions that Walt Morris introduced when he formed Winnipeg Dodge Chrysler through the merger of two pre-existing Chrysler dealerships about eight years ago.

Other such events throughout the year include Score to Win, Drive for Show, Putt for Dough, Let it Roll, Let It Snow, Crack Walt’s Vault and – up next – Armchair Quarterback.

“We had given away over $250,000 in prizes up to last summer,” says Morris, who is president of Winnipeg Chrysler and co-owner with Darcy McLean of Winnipeg Suzuki. (Morris also owns Winnipeg Collision Centre and the Red River Speedway.)

With his winnings, Lischka is planning on a holiday at a five-star resort.

“My son just bought a new house,” he adds.  “I will help him out with the payments, too.” 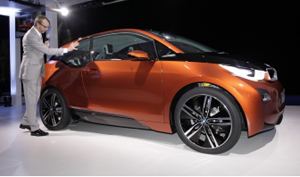 July 22, 2013 The Premier Publications Team Comments Off on BMW releases i3 pricing