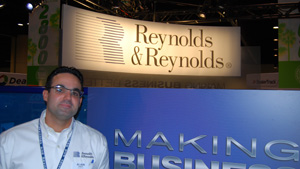 Reynolds and Reynolds, one of the industry’s largest supplier of automobile services, forms and dealership software, has announced it will continue as sole DMS supplier to BMW or MINI retailer s in Canada.

“The entire Reynolds Canada team is extremely proud of this relationship…” Alain Sabbah, the VP of sales for Reynolds and Reynolds Canada said in a release. “Especially as the industry recovers from the recent downturn, we expect to build on this foundation as we continue to help BMW and MINI retailers in Canada serve their customers more effectively and profitably,”

The first agreement between the companies was made in 2001. The relationship extends to BMW’s 40 Canadian retailers and 26 MINI shops across the country.

The company will continue to provide DMS service for the automaker’s Canadian operations. Sabbah said retailers would also be able to contact Reynolds and Reynolds on a toll-free support number located in the Reynolds Technical Assistance Center.

According to the company, Reynolds and Reynolds is the only DMS provider in Canada with exclusive OEM partnerships.

Further information about Reynolds is available at www.reyrey.com.