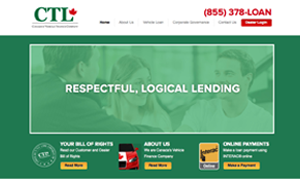 Finance company CTL has added some automotive finance experience to its executive team.

“Sean is a pre-eminent leader in Canada's consumer automotive finance industry,” the company said in a release.

“CTL has pulled together a great team and built a strong business platform; I'm really excited about the growth opportunities both in products and in the portfolio” O'Brien noted.

Functions under his leadership include credit, risk, sales, marketing, collections and customer service.

The executive shuffle continued with news that Scott Newhouse had been appointed president of CTL following a four-year term as COO. Under his tenure, Newhouse helped construct the platform and form the team to grow the portfolio from nothing in 2010 to $75 million in 2014.

Andy Le has been appointed chief financial officer after serving as V-P of finance, compliance and analytics.