For Jeff Hewitt, success in F&I is not about a magic bullet.

It all starts first and foremost with instituting the right process from the top down.

“There is a focus right from the very beginning with the salespeople that they are going to endorse and support the business office and provide a good turnover for every customer, every time,” he explains.

And speed is also a key as the market and buyers change.

“We know the customer won’t sit there for hours to get things done,” he says, noting that the dealership has been working on speeding up the entire process – sales and F&I – as the customer only has so much patience to expend at the store.

“If you use too much of the consumer’s time in the sales process, they won’t have a good turnover. When I first became a sales manager I was always telling my salespeople to slow down. Now we’re trying to move it along as quickly as we can.”

Hewitt has been with Cullen for 4 ½ years spending the last 2 ½ as general manager. His experience in the industry goes back to 1988. The dealership is a solid performer in the Niagara region and posts strong business office profit totals year-over-year.

Though he didn’t want to reveal exact average F&I grosses for the store, he said the dealership’s target is an average of $1,800 per retail unit sold. With the store selling roughly 1,200 units annually, combined new and used, you can certainly do the math.

He describes the store as having a “traditional process” with a deep F&I culture that starts with the dealer himself.

“He’s not afraid to grab a salesperson at any given time and talk about their F&I performance,” Hewitt says, noting he runs monthly reviews in sales meetings of F&I sales.

“We have huge whiteboards in the boardroom showing everybody’s performance and two excellent business managers that we have high expectations of. We hold our business office managers to a very high standard and review numbers on a continuous basis. We demand results.”

Helping boost the penetration of things like extended warranties – the store’s first priority followed closely by insurance and protection packages – is a concentrated effort by the sales team to build value in the products.

While some dealerships might have salespeople indirectly torpedo the business office efforts while making the sale: “There is no need for the extended warranty on this baby, this truck is so solid it will last forever.” The team at Cullen Motors is all working towards the same goal.

And the financial rewards reflect it.

“Our sales bonuses are the whole package meaning they have to sell a certain number of cars and have an F&I average of X number of dollars to qualify,” Hewitt explains.

When asked about the growing trend of employing a hybrid process that rolls selling the vehicle and the F&I products into one system with one person, Hewitt takes an honest approach.

While he sees the need for a more efficient system, not surprising given his proclivity for wanting to speed up the entire sales process now, he thinks there is a way to go before we see wide adoption in Canada.

“I believe there will have to be, from a commission standpoint, some kind of redistribution of gross. On the new car side of the business where margins have been compressed by the manufacturers, we have salespeople and front end commissions that are not succeeding the way they use to,” he says.

“I can foresee a time where you’ll see sales staff rewarded on the total gross of the deal rather than just the front end gross. But when you will see pay plans change in that sense I don’t know. I just have a hard time seeing today’s salesperson being able to perform well both on the sales floor and secure an $1,800 average in F&I.”

So while the likes of Sonic Automotive and its One Sonic-One Experience model might be making inroads for the U.S. mega group, Hewitt suggests systems like that function only when there is major sales volume to back it up. 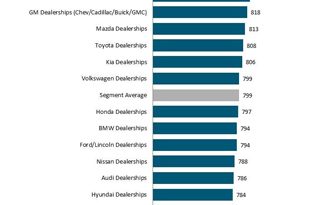