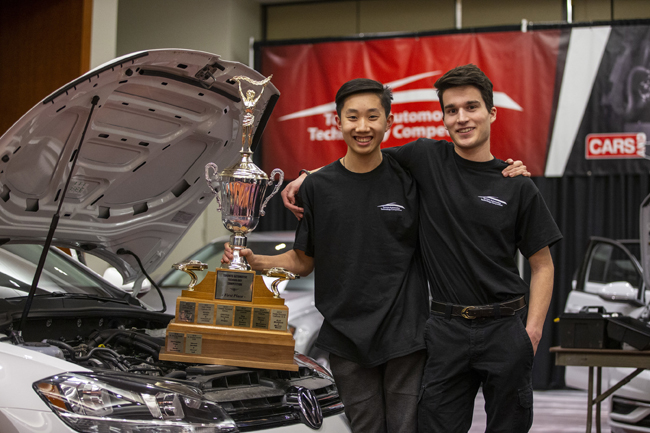 Automotive technology students from across Ontario competed in the 21st annual Toronto Automotive Technology Competition where they put their auto skills to the ultimate test.

The competition was presented by Centennial College and the Trillium Automobile Dealers Association (TADA), in partnership with Cars and Jobs, at the Metro Toronto Convention Centre ahead of the Canadian International Auto Show (Feb. 14-23).

A total of 18 schools competed throughout the day, and coming victorious were Anthony Vecchiarelli and Alexander Liao from St. Brother André Catholic High School in Markham, Ontario. The winning team will represent its school and TADA, at the prestigious National Automotive Technology Competition in New York City this April.

“Our judges were very impressed by the talent and skill of not only the winners, but all of the students,” said Craig Stephenson, president and CEO of Centennial College. “They all have bright futures ahead of them and should be very proud of their performance.”

“Every year, the students blow us away with their technical knowledge, problem solving skills, and their enthusiasm,” said Todd Bourgon, executive director of TADA. “Ontario’s auto industry would greatly benefit from having these young people consider joining our sector when they are done with their studies.”

Lecce began the morning with some words of encouragement to the students, emphasizing the importance of skilled trades. Ford and Dunlop chatted with students during the second half of the competition.

“Volkswagen is proud to sponsor the Toronto Automotive Technology Competition and support an event that inspires young people to work in the auto industry long-term,” Tetzlaff said.

“We hope that an event like this inspires young people to consider a long-term career in the auto sector,” Bourgon said. “Whether you are looking for a career as a technician, in sales, finance, IT, or marketing, auto dealerships are a great place to look for motivating, well-paying jobs, and our Cars and Jobs platform helps connect job-seekers with these opportunities.”

Despite recent economic challenges and uncertainty surrounding auto tariffs, Canadians continue to purchase greener and technologically advanced vehicles at record rates. 2019 was another solid year with over 1.91 million new vehicles sold across the country and ranking among the top-five selling years on record.

Opportunities to work in dealerships continue to grow across Canada as employment in the overall auto industry has been consistently growing in the last decade. According to Statistics Canada, the auto industry’s weekly earnings average $1,130 nationally compared to average weekly earnings of $610 for the retail sector at large.

July 24, 2012 The Premier Publications Team Comments Off on Lincoln: a reinvention