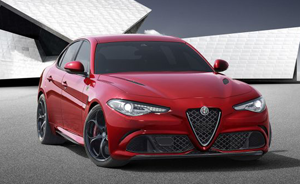 FCA chief Sergio Marchionne and the team at Alfa Romeo clearly have German luxury brands in their sights.

The company revealed its midsize sedan offering Giulia at an international press event earlier this week in quintessential Italian fashion – with Andrea Bocelli belting out opera at the Alfa Romeo Museum in Arese near Milan.

“The Giulia represents the beginning of the rebuilding of the Alfa Rome brand,” Marchionne told the press at the event, which also coincided with the 105 year birthday for the Alfa Romeo brand.

“We needed a team to think outside of the box to think from a clean sheet of paper. We needed people who could create a fresh approach.”

The day marked the culmination of what was essentially a secret project within the company. Marchionne had mentioned several times recently that he had tasked hundreds of engineers with working on Guilia and other Alfa Romeo vehicles at a secret location in Italy.

The product, a midsize sedan aimed squarely at the likes of BMW, Mercedes-Benz and Audi, seeks to offer luxury with an Italian flair. It will also be the first volume product for the brand to hit North American shores in a generation.

Canadian Alfa Romeo dealers currently retail the niche sports car 4C, though annual sales are not expected to move much past 100 units. Giulia, however, is expected to help set the tone for the brand moving forward as it sets its eye on growth.

Giulia has an engine tuned by engineers with Ferrari backgrounds that delivers 510 horsepower.

FCA says it accelerates from 0 to 100 in just 3.9 seconds. The car also boasts a “perfect” 50/50 distribution across two axles.

FCA Canada president Reid Bigland told Canadian AutoWorld at a dealer event in May that Giulia would hit the Canadian lineup in late Q1 of next year.

Plans first discussed with FCA investors in May 2014 by Harald Wester, chief technology office and head of Alfa Romeo, also called for seven more models by 2018 setting up a head-to-head rivalry with the German luxury makes.

Global volume objectives for the Italian brand are pegged at 400,000 units by 2018 – that will be up from 74,000 from 2013. With roughly half of that expected in North America and assuming a 90/10 split between the U.S. and Canada and Alfa totals are expected to top approximately 15,000 units annually in three years.