The company reported record monthly sales once again in October. With 165,851 – previous year 157,621 – BMW, MINI and Rolls-Royce vehicles delivered worldwide, sales were 5.2 per cent higher than in the same month last year.

Ian Robertson, management board member of BMW AG, responsible for sales and marketing BMW said “We remained on track with a new all-time high in sales in October and in the first 10 months, despite the continued headwinds in some European markets.

“The BMW Group maintains its position as the leading manufacturer of premium vehicles worldwide.”   Sales highlights included the 500,000 BMW X1 vehicles sold its launch in late 2009.

“Around a million of these highly-successful models have been delivered since the first generation was introduced in January 2004,” the automaker said.

Around 600,000 customers have purchased a BMW 3 Series since the market launch of the sixth generation in February 2012.   MINI reported an all-time sales high of 25,420 vehicles worldwide in October – up 24,483 from the previous year, and a “new record” for the first 10 months of the year.

The BMW Group reported sales growth in nearly all of its markets in the first 10 months of the year. 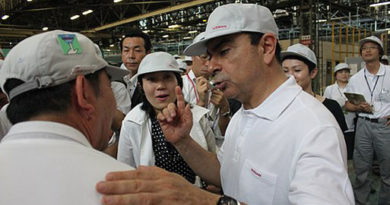 Ghosn Ousted From Nissan Board By Shareholders

April 8, 2019 Tom Venetis Comments Off on Ghosn Ousted From Nissan Board By Shareholders

Electric cars sales to stall for more than a decade: KPMG survey

February 24, 2012 The Premier Publications Team Comments Off on Electric cars sales to stall for more than a decade: KPMG survey