Deprecated: Methods with the same name as their class will not be constructors in a future version of PHP; CMBDWidgetCatWithNumber has a deprecated constructor in /var/www/canadianautoworld.ca/public_html/wp-content/plugins/cm-business-directory-pro/shared/classes/CMBDWidgetCatWithNumber.php on line 3
 Breitschwerdt leaving Mercedes-Benz Canada for UK – Canadian Auto World

Marcus Breitschwerdt is officially saying goodbye to the Canadian operations he helped propel to record figures over the past eight years.

The announcement came this week in Mississauga, Ont. during the opening of the automaker’s massive new national logistics centre and training academy near Pearson International Airport.

“It’s a pretty emotional moment after roughly eight years to give your final official speech and almost complete your last duties,” Breitschwerdt said to the assembled crowd of corporate staff, dealers and the media.

A somewhat emotional Breitschwerdt thanked his family, his management team and the dealers who have lead the push for Mercedes-Benz in Canada.

As head of Canadian operations for eight years, he has guided the luxury automaker through a period of large growth, pushing for higher sales figures every year. Under his guidance, Mercedes-Benz Canada finally finished atop the luxury sales market in 2010 beating the competition from Bavaria, BMW.

According the company, he will now take that record of success to the U.K. and steer British operations for Mercedes-Benz.

Replacing Breitschwerdt will be Tim Reuss. According to Joachim Schmidt, executive V-P of sales and marketing for Daimler AG, Royce has served a variety of roles with Daimler over the last 23 years.

“I’m thrilled to be here today and to become a member of the winning team at MB Canada,” Reuss told the crowd. “Looking at the future ahead of us and the growth potential we have… we expect the sales growth we have had over the last few years to continue into the future.”

Before literally passing a torch to Schmidt who, in turn, handed it off to Reuss, Breitschwerdt thanked the crowd for the support.

“I say goodbye and wish you all the best.” 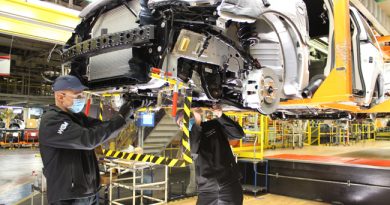