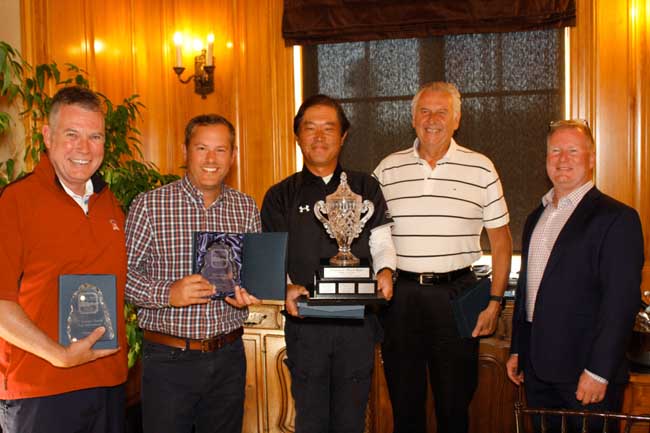 On Monday September 9th, 116 participants from the automotive industry, teed off at the renowned Magna Golf Club in Aurora, ON, for the 22nd annual Canadian Black Book Kathy Ward Memorial Golf Tournament.

For 2019 the charitable tournament raised over $25,140 for the Tim Horton Children’s Foundation.

The weather cooperated much better for the 2019 edition, versus near monsoon conditions last September, the year the tournament was renamed in honour of long time Canadian Black Book CEO Kathy Ward. Kathy lost her battle with cancer in December, 2017. Since inception in 1997 the tournament, which was a major passion for Kathy, has raised well over $600,000 for the Tim Horton Children’s Foundation.  The Tim Horton Children’s Foundation states its mission to ‘foster the strengths within youth to achieve their full potential and empower them to pursue a life without limits’.

“Kathy would be so proud to know her legacy continues to raise substantial funds to help send less fortunate children to camp,” said Brad Rome, president, Canadian Black Book.  “She would be so grateful to see this tournament sell out year after year, with participants from across the industry she loved, who are so willing to contribute to such a great cause.”

Kathy Ward originally had a goal to send 1,000 children to camp.  The cost to send each child to a Tim Horton Children’s Foundation camp is approximately $1,000.  “It is so amazing that we are so close to three quarters of the way to meeting Kathy’s ultimate goal,” added Rome.

The scramble format tournament was won by Dave Forrest, Boyd Mickle, Yasushi Enami and Don Durst from Subaru Canada (with Brad Rome) with an impressive score of 13 under par.  The tournament saw sunny skies and golfers thoroughly enjoying the pristine golf course and activities including the RBC golf ball cannon, putting challenge and more.

FCA to Change Name to Stellantis with Peugeot Merger in 2021

July 15, 2020 Tom Venetis Comments Off on FCA to Change Name to Stellantis with Peugeot Merger in 2021