Oil-soaked plastic boom material used to soak up oil in the Gulf of Mexico is finding new life as auto parts in the Chevrolet Volt.

General Motors has developed a method to convert an estimated 100 miles of the material off the Alabama and Louisiana coasts and keep it out of landfills.

The ongoing project is expected to create enough plastic under hood parts to supply the first year production of the extended-range electric vehicle.

Recycling the booms will result in the production of more than 100,000 pounds of plastic resin for the vehicle components, eliminating an equal amount of waste that would otherwise have been incinerated or sent to landfills.

The parts, which deflect air around the vehicle’s radiator, are comprised of 25 percent boom material and 25 per cent recycled tires from GM’s Milford Proving Ground vehicle test facility. The remaining is a mixture of post-consumer recycled plastics and other polymers.

The work in the Gulf is expected to last at least two more months and GM will continue to assist suppliers in collecting booms until the need no longer exists. The automaker anticipates enough material will be gathered that it can be used as components in other Chevrolet models.

The world’s first electric vehicle with extended range, the Chevy Volt was recently awarded North American Car of the Year.

GM uses recycled and renewable materials in its cars and trucks, which are at least 85 per cent recyclable.

Used tires, old plastic bottles, denim and nylon carpet are all redirected from landfills and reused in select GM vehicles.

GM facilities worldwide recycle 90 per cent of the waste they generate. 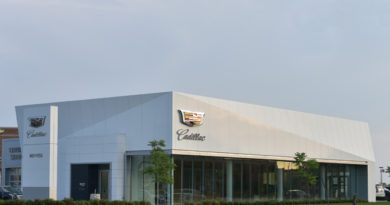