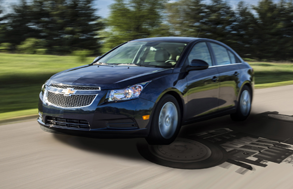 If General Motor’s new Chevrolet Cruze Diesel succeeds in mainstreaming diesel cars in Canada, it would be a fitting redemption for GM. After all, it was GM’s misbegotten diesels of 30 years ago that largely killed the market for the fuel-saving technology here in the first place.

It wasn’t just that GM’s diesels were slow, dirty and noisy – back then, so were all diesels. GM’s crime was that its V8 diesel was also chronically unreliable. North American buyers of domestic vehicles have been slow to forget or forgive.

Since then, Volkswagen has continued to sell diesels to a small clique of knowledgeable enthusiasts – joined in recent years by a surprising number of European luxury-SUV shoppers. As those European-car buyers know, today’s diesels are fast, quiet, clean, and even more fuel-efficient than their predecessors.

But the availability of a relatively affordable diesel-engined compact in Chevrolet stores (as opposed to Volkswagen dealerships in Canada) still isn’t going to make diesels mainstream overnight. For one thing, public awareness of diesel’s rehabilitation is still limited. For another, so is the availability of the 2014 Cruze Diesel.

“It’s not going to be high-volume,” says GM Canada spokesman George Saratlic, “but we’ll sell as many as we get.”

Deliveries started in mid May, he added, and as of late August, 177 had been sold in Canada.

That’s about two per cent of the approximately 9,000 Cruze sales in total over the same period.

Compare that with a diesel (TDI) take rate of typically 30 per cent for the VW Jetta.

Dar Gladish is leasing manager for Courtesy Chevrolet in Toronto. At time of writing, his store had sold four Cruze Diesels – “and that’s more than we’ve gotten,” he said. “We’ve been trading with other dealers for them.”

Most dealers, he said, have one or at most two diesels in stock, if they have any.

Gladish said the easiest part of selling the Diesel is the high residual value that GM has put on it.

“They are a great value even if you don’t care about the engine. Every diesel has leather and a higher level of standard equipment. The customer gets the diesel engine as a bonus because the lease payments are similar to a non-diesel.”

The Cruze Diesel is available only with automatic transmission and lists for $24,945. The gas-engined Cruze closest in trim to the diesel is the 2LT, which MSRPs at $22,845 including the automatic option. That’s a $2,100 purchase-price premium for the Diesel.

Its only direct competitor, the VW Jetta TDI with automatic, starts at $25,590. The VW has a manual gearbox as standard for $24,190. But more than 80 per cent of TDI buyers choose the automatic, says VW Canada spokesman Thomas Tetzlaff.

The lack of a manual option has been mentioned by some Cruze prospects, said Gladish, “but that doesn’t stop them from looking seriously at the car.”

Tetzlaff added that Volkswagen Canada welcomes the new competition from the Cruze Diesel (and from Mazda’s coming diesel version of the midsize Mazda6 sedan).

“We firmly believe the market is nowhere near reaching its potential,” he said.

“We’re not going to fight against Chevrolet and Mazda for the diesel buyer, we are going to fight with them to raise awareness of clean diesel. We have done well [with diesel],” he added, “but the vast majority of buyers won’t even consider diesel, either because they don’t know about it, or they have misconceptions. Volkswagen Canada doesn’t have enough marketing muscle, but GM has strength, and Mazda can add a little. If we all work together we can make the whole pie a little bigger.”

Gladish said Courtesy Chevrolet’s Cruze Diesel buyers have not traded in any foreign cars – “no TDI fans have made the switch yet.”

He recalled one customer who had traded in a 2011 Cruze LTZ (the top-of-the-line trim) for a Diesel. Another Diesel was sold to a telecomm company for use by a sales rep.

On paper, the Cruze shows well against its (slightly more-expensive) German rival. It claims more horsepower (151 hp vs. 140), higher peak torque (264 lb.-ft. vs. 236) and better highway fuel consumption (4.2 L/100 km versus 4.7). But the Volkswagen delivers its peak torque at lower engine speeds. That means it may feel faster in routine city driving, and needs fewer revs to achieve a given rate of acceleration, which likely explains why the VW has a better city rating (6.7 L/100 km vs. 7.5).

Chevrolet already has a high-fuel-economy model in the Cruze line-up – the gas -engined Eco. Priced at $20,795 ($22,245 with automatic), that will continue to be available despite the debut of the diesel alternative.

The latter is positioned to attract the customer who does a lot of highway driving, and comes in just one package that targets the base trim Jetta TDI.

“It’s been a long time since we offered a diesel car of any sorts,” said Saratlic, “and some thought went into this. We looked at who’s buying diesels and what they want. And it’s simple for our dealers. It’s a bit of a test car for us.”