Honda says it will accelerate North American production to a rate of 100 per cent of its original production plan in August, for all models except the 2012 Civic.

As the supply of parts from Japan improves, production will ramp-up in August on a step-by-step, plant-by-plant and model-by-model basis, with production returning to 100 per cent of the original plan, including the Accord, CR-V and Acura RDX, as well as all V-6 models including the Accord, Accord Crosstour, Odyssey, Pilot, Ridgeline, Acura TL and the Canadian-built Acura MDX and ZDX.

Production of the all-new 2012 Civic lineup will continue at a reduced rate of approximately 50 per cent due to the limited supply of key components, Honda said in a statement last week.

“However, this situation continues to be evaluated and full production is expected to resume sometime in the fall, with plans to meet anticipated strong demand for the fuel-efficient Civic lineup.”

Jerry Chenkin, executive vice president of Honda Canada Inc. said the automaker is pleased to see a positive turnaround represented by the significant improvement in production.

“Throughout this crisis, Honda has been working hard to achieve a speedy recovery, while maintaining a focus on our longer-term plans for continued growth in sales and production in order to meet the growing needs of our customers,” he said.

Honda noted it has managed the unprecedented parts supply issues that resulted from the devastating impact of the March 11 earthquake and tsunami in Japan with no layoffs at any of its 14 production plants in North America.

In 2010, approximately 95 per cent of the Honda and Acura vehicles sold in Canada were produced in North America. 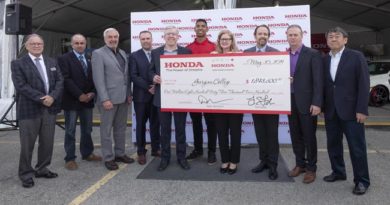