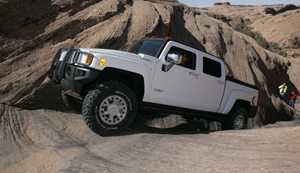 Hummer may have reached the end of its oversized road.

General Motors had been working for months on a deal to sell its popular SUV line to Sichuan Tengzhong Heavy Industrial Machines Co. But Chinese regulators refused to approve the sale this week forcing the wind-down of yet another GM brand.

“We are disappointed that the deal with Tengzhong could not be completed,” John Smith, vice-president of GM’s corporate planning and affairs, told The Associated Press.

“GM will now work closely with Hummer employees, dealers and suppliers to wind down the business in an orderly and responsible manner.”

GM reps had been working with Tengzhong on a deal reportedly worth US$500 million to offload the SUV line. Hummer had been one of the four brands the Detroit giant was trying to unload after entering bankruptcy protection in the U.S. last spring.

The Asian company, which manufactures heavy construction equipment, would have seen Tegnzhong take an 80 per cent share of the profits with the remaining 20 per cent going to an investor Suolang Duoji.

With three days before the Feb. 28 deadline, there is a small window for Hummer to continue, though hopes are not high a Spyker-like saviour can be found in time.

There is no word on how the refusal will shake up Canadian Hummer dealers. Though General Motors has said it will continue to honour warranties and provide service and parts support to current Hummer owners.

Esso goes Top Tier across the board

November 30, 2010 The Premier Publications Team Comments Off on Esso goes Top Tier across the board