Ivy Charging Network, ONroute and their partners, Canadian Tire Corporation and the Ministry of Transportation announced the opening of six EV fast-charging stations.

“Our partnership with ONroute, Canadian Tire and the Ontario Ministry of Transportation will end range anxiety for EV drivers travelling on the province’s major highways. These new fast-charging locations will give drivers the confidence they need on their road trips, to get them where they need to go this summer,” said Michael Kitchen, general manager, Ivy Charging Network.

Each of Ivy’s level 3 fast-chargers at ONroute locations will support the charging of all EV models, including charging ports for Tesla drivers.

The Ivy Charging Network is installing a total of 69 level 3 fast-chargers across all ONroute locations, with the possibility of further expansion. Each location will have between two and four chargers to serve EV drivers. Ivy’s ONroute Charge & Go locations will offer charging speeds of up-to 150 kWs, delivering up to a 100 km charge in 10 minutes. This partnership is part of CTC’s ongoing expansion of EV charging infrastructure across Canada. Natural Resources Canada, through its Electric Vehicle and Alternative Fuel Infrastructure Deployment Initiative, invested $8-million to help build the Ivy Charging Network.

“We’re making electric vehicles more affordable and charging more accessible for Canadians from coast to coast to coast. Investing in more EV chargers, like the ones announced today in Ontario, will put more Canadians in the driver’s seat on the road to a net-zero future, and help achieve our climate goals,” said the Honourable Jonathan Wilkinson, Minister of Natural Resources.

“Ontario is building critical infrastructure in convenient and accessible locations like ONroute stops along our highways,” said Todd Smith, Minister of Energy. “Beginning today, drivers can pull into an ONroute station along our province’s busiest highway to grab a coffee or a meal while charging their car, making it easier to explore Ontario or visit family and friends. These new EV fast charging stations will boost EV ownership, support Ontario’s growing EV manufacturing industry and reduce emissions.” 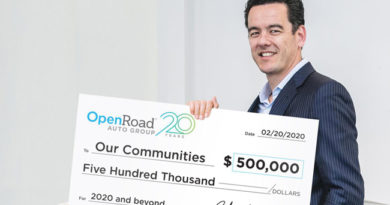 OpenRoad Auto Group To Donate Half A Million Dollars To B.C. Charities

February 21, 2020 Tom Venetis Comments Off on OpenRoad Auto Group To Donate Half A Million Dollars To B.C. Charities