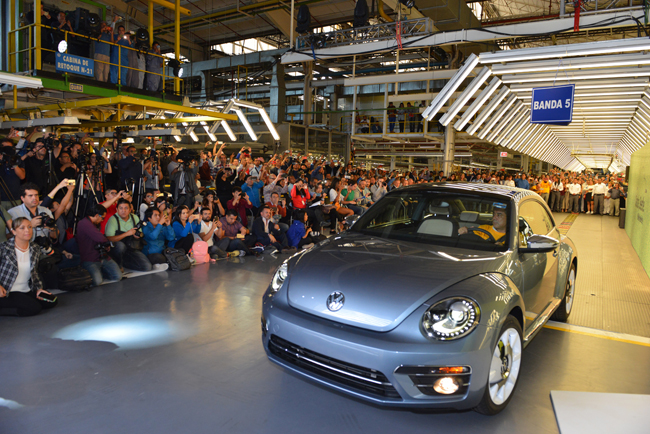 The last Volkswagen Beetle rolled off the production line, bringing to an end an iconic and beloved automobile that was first introduced in the late 1930s in Germany and began to make its way to North American in 1949 with the first imports of the vehicle.

The final car produced by Volkswagen de Mexico’s Puebla plant—a Denim Blue coupe—will live on display at Volkswagen’s local museum in Puebla as a l tribute to the automobile’s rich and storied heritage.

Volkswagen de Mexico will soon shift resources to produce a North American market-focused compact SUV that fits in the manufacturer’s lineup below the Tiguan.

“It’s impossible to imagine where Volkswagen would be without the Beetle,” said Scott Keogh, president and CEO, Volkswagen Group of America. “From its first import in 1949 to today’s retro-inspired design, it has showcased our company’s ability to fit round pegs into square holes of the automotive industry. While its time has come, the role it has played in the evolution of our brand will be forever cherished.”

Introduced to America as the Type 1, Volkswagen sold nearly five million Beetles in the United States, and a worldwide total of 21.5 million cars. In 1998, the New Beetle—an early automotive adopter of “modern retro” design language—re-introduced the familiar silhouette to a new generation of drivers, and sold more than 1.2 million cars between 1998 and 2010. In 2011, the third, and current generation of Beetle went on sale in the U.S. as a 2012 model, and more than 500,000 have been built since.

Sold in both coupe and convertible variants, the second- and third-generation of Beetles have collectively been produced in 23 different exterior colors, 32 interior trims, 13 varying engine configurations and 19 special editions, including the Dune, Denim, Coast and #PinkBeetle. All second- and third-generation Beetles have been built by Volkswagen de Mexico, Puebla, and have been sold in 91 markets worldwide.

The end of Beetle production will allow Puebla’s resources to shift production to a new compact SUV tailored to the North American market, slotting into the lineup below the Tiguan.

After its celebration, the final Beetle will be displayed at Volkswagen’s museum in the city of Puebla, Mexico. The last cars built for the U.S., a pair of Kings Red vehicles with custom dashes, keys and quilted seats, will join Volkswagen of America’s collection of historic vehicles.

July 28, 2010 The Premier Publications Team Comments Off on Honda Canada to introduce battery-electric and plug-in hybrid