Deprecated: Methods with the same name as their class will not be constructors in a future version of PHP; CMBDWidgetCatWithNumber has a deprecated constructor in /var/www/canadianautoworld.ca/public_html/wp-content/plugins/cm-business-directory-pro/shared/classes/CMBDWidgetCatWithNumber.php on line 3
 Mazda considering ending joint venture with Ford: report – Canadian Auto World

News reports out of Tokyo this morning indicate Mazda Motor Corp. is considering leaving its joint venture with Ford and stopping American production.

The Nikkei financial daily is citing unnamed sources close to the matter who said Mazda would build vehicles in Japan and Mexico for shipment to the U.S. and Canada.

Both automakers have a 50/50 stake in operating the AutoAlliance International plant in Flat Rock, Michigan. The sources indicate Mazda may sell its stake to Ford as part of its production restructuring plan.

Mazda has since issued a statement in response pointing out that the news report is not based on information it had released.

“Mazda and Ford are jointly studying various possibilities for AAI, and we have nothing to announce at this time,” Mazda said. “We do not comment on speculation.”

The Flat Rock plant makes the Mazda6 and Ford Mustang.

This news is the latest in a series of moves the companies have take to divest themselves of a partnership started years ago. Last year Ford cut its stake in Mazda from 11 per cent to 3.5 per cent.

Mazda Canada has not released sales numbers from May yet, though production and supply issues related to the Japanese disasters in March are expected to have hampered sales in Canada.

On a high note, the automaker did recently celebrate the production of its 3 millionth Mazda3 in Hiroshima, Japan in late April. 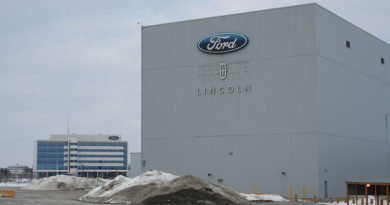 Toyota on the Trail is Now a Go Auto Dealership

July 6, 2018 Tom Venetis Comments Off on Toyota on the Trail is Now a Go Auto Dealership