The new system replaces the Microsoft operating system in use since 2007 with the QNX from Blackberry.

Conceding that MyFord Touch was unpopular, Nair said the automaker has listened to 22,000 customer comments, research clinics and market surveys and other feedback more than it does when it designs a new car.

He went on to say that the system was “device agnostic,” meaning it would work with any type of smartphone. Failure to do that meant alienating tech-savvy consumers.

“We don’t want you making a purchase decision about a $30,000 automobile based on your $200 smartphone,” he told reporters.

Since it first appeared in 2010, MyFord Touch drove down Ford’s approval ratings in the J.D. Power Initial Quality Study from fifth to 23rd.

Although SYNC 3 is most effective when used hands-free use, the automaker said an all-new touch screen delivers an experience similar to a smartphone or tablet.

Other features include quicker response to touch as well as voice commands and smartphone-like gestures including pinch-to-zoom and swipe are central to SYNC 3, along with “crisp, modern graphics.”

A bright background and large buttons with high-contrast fonts for daytime use help reduce screen washout in the sun.

At night, the display automatically switches to a dark background to help reduce eye fatigue and minimize reflections on the windows.

Tile-like icons dominate the screen, with a quick access function tray along the bottom making for a more straightforward user experience.

Phone contacts are searchable via a simple swipe of the finger to scroll through the alphabet.

With “One Box Search,” SYNC 3 users can look up points of interest or enter addresses in much the same way they use an Internet search engine,” Ford said.

“We considered all the modern smartphones and mobile operating systems and created something familiar but unique,” said Parrish Hanna, Ford global director of human machine interface.

A Ford of Canada rep told Canadian AutoWorld the next-generation SYNC system would “migrate into all our products beginning next year.”

With files from Automotive News. 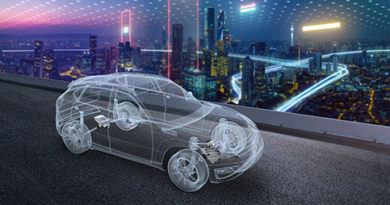 May 6, 2010 The Premier Publications Team Comments Off on Nissan announces recall over airbag issue